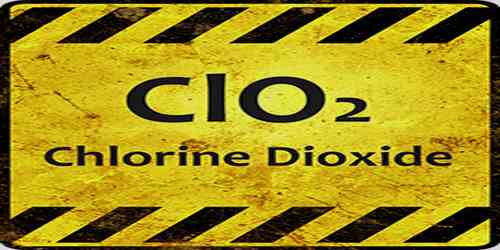 Chlorine dioxide (ClO2) is a yellow to reddish-yellow manufactured gas. It does not occur naturally in the environment. When added to water, chlorine dioxide forms chlorite ion, which is also a very reactive chemical. Like sodium hypochlorite, calcium hypochlorite and chlorine gas, ClO2 is a chlorine-based drinking water and wastewater disinfectant. A gas at room temperature, ClO2 dissolves easily in water. Chlorine dioxide occurs as a yellow greenish crystal and appears as a bright orange color when seen at -59°C (-74°F). It is used as a bleaching agent at paper manufacturing plants, and in public water treatment facilities to make water safe to drink.

Although chlorine dioxide has “chlorine” in its name, its chemistry is radically different from that of chlorine. When reacting with other substances, it is weaker and more selective, allowing it to be a more efficient and effective sterilizer. For example, it does not react with ammonia or most organic compounds. Chlorine dioxide oxidizes products rather than chlorinating them, so unlike chlorine, chlorine dioxide will not produce environmentally undesirable organic compounds containing chlorine. Chlorine dioxide is also a visible yellow-green gas allowing it to be measured in real-time with photometric devices. Structure and Properties of Chlorine Dioxide Alternatively, NaClO3 (sodium chlorate) can be used instead of potassium chlorate to form chlorine dioxide per the chemical formula:

Chlorine dioxide gas is never handled in concentrated form, but is almost always handled as a dissolved gas in water in a concentration range of 0.5 to 10 grams per liter. Its solubility increases at lower temperatures, thus it is common to use chilled water (5 °C, or 41 °F) when storing at concentrations above 3 grams per liter. Chlorine dioxide hydrate, frozen is an orange colored solid, appearing as a block of ice, with a faint odor of chlorine. It may only be shipped in the frozen state and then only by private or contract motor carrier. The melting point of the hydrate is around 30°F. If it should thaw and further warm up, chlorine dioxide gas is given off. The gas is toxic by inhalation. The gas and liquid are violently decomposed by organic materials. The gas will decompose explosively at temperatures below the boiling point of water. It is used to bleach wood pulp, fats and oils; in processing flour, and for water purification. Chlorine dioxide is a yellow to reddish gas or a red-brown liquid below 52 deg. F. with an unpleasant odor similar to chlorine. Chlorine dioxide is widely used as an antimicrobial and as an oxidizing agent in drinking water; poultry process water, swimming pools, and mouthwash preparations. It is used to sanitize fruit and vegetables and also equipment for food and beverage processing and widely used in life science research laboratories. It is also employed in the health care industry to decontaminate rooms, passthroughs, and isolators and also as a sterilant for product and component sterilization. It is also extensively used to bleach, deodorize, and detoxify a wide variety of materials, including cellulose, paper-pulp, flour, leather, fats and oils, and textiles. Approximately 4 to 5 million pounds are used daily.