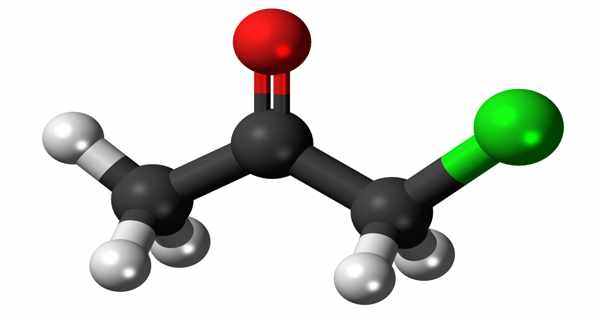 The chemical compound chloroacetone has the formula CH3COCH2Cl. It has been stabilized and appears as a yellow liquid with an unpleasant pungent odor. It is a colorless liquid with a strong odor at STP. Light sensitive, but stabilized with small amounts of water and/or calcium carbonate. When exposed to light, it transforms into a dark yellow-amber color. During World War I, it was used as tear gas.

Chemical – Chloroacetone is a chemical that is used in the Feist-Benary synthesis of furans. It will slowly polymerize under the influence of light, posing a fire or explosion hazard.

Physical – Chloroacetone is a colorless liquid that can turn amber when exposed to air for an extended period of time. Although it is miscible with most organic solvents, it is only slightly soluble in water and sinks in it.

Chloroacetone can be produced through the reaction of chlorine and diketene or through the chlorination of acetone.

Chloroacetone is a chemical intermediate that is used to make dye couplers for color photography. It is also used in the Feist-Benary furan synthesis.

Through acid-catalyzed condensation with fatty alcohols, chloroacetone was used in the synthesis of double-chain nonionic surfactants with an acid decomposition function (octyl, decyl, and dodecyl). It was also used to make meso-tetramethyl tetrakis-(4-phenoxy acetone)calyx pyrrole.

It is slightly soluble in water and has a higher density than water. Vapors that are much heavier than air. It irritates the skin and the eyes. Toxic when ingested or inhaled.

Commercially available chloroacetone contains 5% impurities, including mesityl oxide, which is not removed by distillation. Mesityl oxide can be oxidized with acidified KMnO4 to form a diol (followed by ether separation), which is then removed during subsequent distillation.

Chloroacetone is extremely toxic and a potent lacrymator. Many hobby chemists who have worked with the substance have stated that even trace amounts of the substance are enough to cause severe lacrymation, sometimes lasting hours. At high enough concentrations, it will also irritate the skin, mouth, and nose, and may even cause injuries.