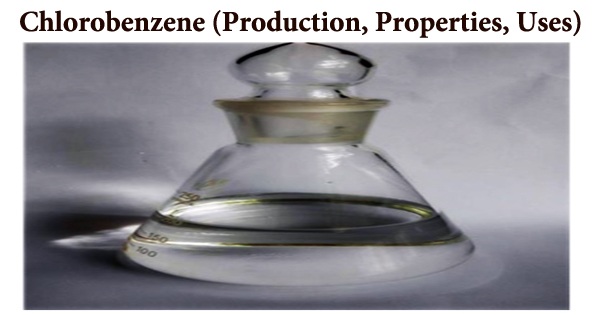 Chlorobenzene (C6H5Cl) is an aromatic organic compound, and it is a colorless, flammable liquid with an aromatic, almond-like odor. It’s a monocyclic aromatic molecule with one chlorine atom replaced for one hydrogen atom on the benzene ring. It’s made by using a catalyst to chlorinate benzene in the liquid phase. This colorless, flammable liquid is a commonly used solvent and intermediary in the production of other compounds.

At room temperature, chlorobenzene is a colorless, flammable liquid with a sweet almond-like flavor, a high vapor pressure, a moderate octanol-water partition coefficient (log 2.8), and moderate to low water solubility (497.9 mg/L @ 25°C). In 1851, it was first characterized. Chlorobenzene is made by chlorinating benzene in the presence of a Lewis acid catalyst such as ferric chloride, sulfur dichloride, or anhydrous aluminum chloride:

Chlorobenzene is a nonpolar solvent with high solubility, yet it is practically insoluble in water. Chlorobenzene in technical grade is generally 99 percent pure, with just 0.05 percent benzene and 0.1 percent dichlorobenzenes as impurities. It’s a common solvent that’s also employed as an intermediary in the production of other compounds. The chlorine’s electrophilicity is improved by the catalyst. Because chlorine is an electronegative atom, C6H5Cl is less susceptible to subsequent chlorination.

To avoid the production of dichlorobenzenes, the reaction is carried out as a continuous process in the industry. Rhodococcus phenolicus is a bacterium that uses chlorobenzene as its primary carbon source. It has a flashpoint of 84°F, is nearly water-insoluble, and is somewhat denser than water (9.2 lb/gal). Pesticides, dyes, and other chemicals are made from vapors that are heavier than air. The Sandmeyer reaction, also known as the benzene diazonium chloride reaction, produces chlorobenzene from aniline.

Chlorobenzene causes fatigue, nausea, lethargy, headache, and irritation of the upper respiratory tract and eyes in humans. Chlorobenzene irritated the skin when it came into contact with it. In this research, no reports on chlorobenzene sensitization were found. Chlorobenzene is the most basic of the monochlorobenzenes, which are benzenes with single hydrogen replaced by a chlorine atom. It functions as a solvent.

On a big scale, chlorobenzene is nitrated to produce a combination of 2-nitrochlorobenzene and 4-nitrochlorobenzene, which are then separated. It was once used to produce phenol and DDT, among other compounds. Chlorobenzene is now employed as a solvent in some pesticide formulations, as a degreaser for car components, and as a chemical intermediary in the production of a variety of other compounds. However, it is not considered a widespread environmental pollutant because it has only been detected at 97 of the 1,177 NPL hazardous waste sites.

Monochlorobenzene is a monocyclic aromatic chemical similar to chlorobenzene. It gets into the environment through industrial and municipal waste. The production and release of chlorobenzene as a byproduct of incomplete combustion in waste incinerators is another potential source. It’s water-soluble to a degree; up to 1,000 milligrams will dissolve in a liter of water.

Chlorobenzene is absorbed from the gastrointestinal system and the lungs. Chlorobenzene is expected to be dispersed throughout whole body fluids due to its high lipophilicity and hydrophobicity, with body lipids being a significant deposition location. When chlorobenzene enters the body through polluted air, the bacteria Rhodococcus phenolicus destroys it as the only carbon source. Chlorobenzene is eliminated through both the lungs and the urine system.

When chlorobenzene is exposed to air, it can evaporate. When combined with water, it dissolves somewhat. The effects of chlorobenzene on human health and the environment are dependent on the amount of the chemical present as well as the length and frequency of exposure. Effects are also dependent on a person’s health or the state of the environment at the time of exposure. Acute and chronic exposure to chlorobenzene has been demonstrated in occupational investigations to induce irritation of the mucosa of the upper respiratory tract and eyes.

Chlorobenzene was previously employed in the production of pesticides, most notably DDT, through a reaction with chloral (trichloroacetaldehyde), but its usage has dropped as DDT’s use has decreased. It’s utilized in the manufacture of phenol and aniline, as well as as a paint solvent and a heat transfer medium. Monochlorobenzene is a solvent that is also used to make phenol and nitrochlorobenzenes.

Chlorobenzene is primarily used as a solvent in pesticide formulations, the manufacturing of diisocyanates, the degreasing of car components, and the creation of nitrochlorobenzene. Chlorobenzene vapors in the range of 1.3-7.1 percent by volume in air produce explosive combinations with air. When dimethyl sulfoxide comes into touch with chlorobenzene, it decomposes dramatically. In the industrial setting, chlorobenzenes are made by reacting liquid benzene with gaseous chlorine in the presence of a catalyst at a moderate temperature and atmospheric pressure.