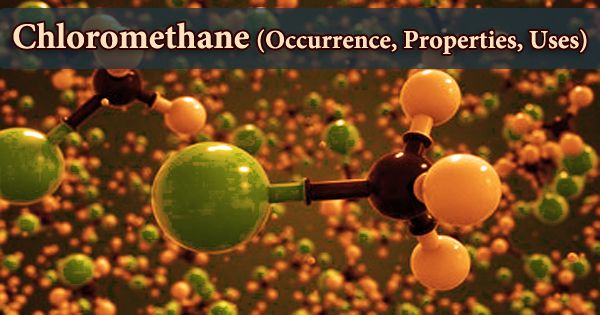 At room temperature, chloromethane, commonly known as methyl chloride, Refrigerant-40, R-40, or HCC 40, is a colorless, combustible gas with a faintly pleasant, nonirritating odor. At 70°F (407 kPa at 21.1C), it is transported as a clear liquid with a vapor pressure of about 59 psig. It is an organic compound with the chemical formula CH3Cl. Although it is rarely seen in consumer items, it is an important reagent in industrial chemistry. It has a mild, pleasant odor that is only detectable at hazardous concentrations. It is both heavier and more combustible than air. At room temperature and in contact with air, dry methyl chloride is relatively stable. It slowly hydrolyzes in the presence of moisture, resulting in the creation of caustic hydrochloric acid.

Chloromethane is a common organohalogen in the atmosphere, whether it is human or natural. It may degrade into harmful end-products at temperatures exceeding 700°F (371°C) (hydrochloric acid, phosgene, chlorine, and carbon monoxide). Alcohol, mineral oils, chloroform, and most organic liquids are all quite soluble in it. Chloromethane is a one-carbon molecule that is methane with a chloro group replacing one of the hydrogens. It functions as a refrigerant, a mutagen, and a marine metabolite, among other things. It belongs to the methyl halides and chloromethanes groups.

The enzyme methyl chloride transferase is found in the salt marsh plant Batis maritima, which catalyzes the creation of CH3Cl from S-adenosine-L-methionine and chloride. This gas, which boils at -23.7°C and freezes at -97.6°C, and is utilized as a refrigerant, catalyst carrier, and methylating agent, is somewhat soluble in water and soluble in alcohol. Also known as chloromethane. The organic waste from the sugarcane business is often burned in the power cogeneration process. This garbage burns when contaminated with chloride, releasing methyl chloride into the atmosphere.

Commercially, methyl chloride (or chloromethane) is made by reacting HCl with methanol in the presence of zinc chloride. Silicone resins and rubbers are the most common applications. In 1835, French chemists Jean-Baptiste Dumas and Eugene Peligot boiled a mixture of methanol, sulfuric acid, and sodium chloride to create it. This strategy is comparable to the one that is currently in use. At 300 degrees Celsius, silicon reacts with an excess of methyl chloride in the presence of a copper catalyst. Mono-, di-, and trichloromethyl silanes are included in the product. The chloro groups are converted to the hydroxymethylsilanes when they are hydrolyzed.

Chloromethane (or Methyl Chloride) is a colorless, flammable, toxic gas that was once widely used as a refrigerant and now has a wide range of current industrial applications, including use as a local anesthetic, a chemical intermediate in silicone polymer and drug manufacturing, an extractant for oils and resins, a solvent in butyl rubber and petroleum refining, and as a local anesthetic, a propellant in polystyrene foam production, a methylating and chlorinating agent in organic chemistry and an herbicide. Methyl mercaptan, methylene chloride, chloroform, carbon tetrachloride, and different bromochloro- and chlorofluoromethanes are some of the compounds made from methyl chloride. It’s also employed as a chlorinating agent, a grease, wax, essential oil, and resin extractant, a low-temperature solvent, and fluid for thermometric and thermostatic equipment.

According to the chemical equation, chloromethane is manufactured commercially by processing methanol with hydrochloric acid or hydrogen chloride:

Depending on the route and level (concentration and time) of exposure, methyl chloride (or Chloromethane) can induce a number of problems ranging from frostbite, drowsiness, and dizziness to paralysis, convulsions, and coma. It’s used to extract heat-sensitive, naturally occurring substances like cocoa, edible fats, spices, and beer hops; as a solvent for cellulose acetate fiber; in the plastic film; in protective coatings; in chemical processing; as a carrier solvent for herbicides and insecticides; and to decaffeinate coffee; it also use as a refrigerant; in oil dewaxing; as a dye and perfume intermediate.

When a mixture of methane and chlorine is treated at high temperatures, a lower proportion of chloromethane is formed. However, more strongly chlorinated chemicals such as dichloromethane, chloroform, and carbon tetrachloride are produced with this approach. By evaporative cooling, contact with the liquid can produce frostbite. It’s simple to light; Vapors are more dense than air. The displacement of air can cause asphyxiation. Containers may break violently and rocket if exposed to fire or extreme heat for an extended period of time. It’s a chemical that’s used to manufacture other chemicals as well as a pesticide.

It’s used as a postharvest fumigant for strawberries, a grain fumigant, for de-greening citrus fruits, as an industrial solvent, in low-temperature extraction, as a solvent for oil, fats, bitumen, esters, resins, and rubber, in coating photographic films, as a food additive, in synthetic fibers and leather coatings, as a spotting agent in the textile industry; and in organic synthesis. The majority of the methyl chloride in the environment is discharged into the atmosphere. After being released into the atmosphere, this chemical has a 10-month atmospheric lifetime due to several natural sinks such as the ocean, transfer to the stratosphere, soil, and so on.

High concentrations produce mental confusion, eye disturbances, muscle tremors, cyanosis, and convulsions; inhalation causes nausea, vomiting, weakness, headache, and emotional disorders; high concentrations cause mental confusion, eye disturbances, muscular tremors, cyanosis, and convulsions. When the methyl chloride generated is released into water, however, it is swiftly lost due to volatilization. The half-life of this substance in terms of volatilization in the river, lagoon, and lake is 2.1 h, 25 h, and 18 days, respectively. It decomposes at temperatures above 400°C or under strong UV radiation in the presence of air and moisture, emitting hydrogen chloride, carbon dioxide, carbon monoxide, and phosgene. Chloromethane was once a popular refrigerant, but it has since been phased out. Chloromethane was also used to make lead-based gasoline additives (tetramethyllead) in the past.