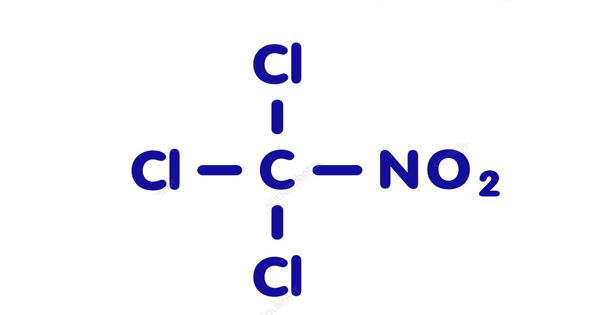 Chloropicrin is a C-nitro compound that is nitromethane in which all three hydrogens are replaced by chlorines. It is also known as PS and nitrochloroform, is a chemical compound currently used as a broad-spectrum antimicrobial, fungicide, herbicide, insecticide, and nematicide. It appears as a slightly oily colorless to yellow liquid with a strong irritating odor. Its chemical structural formula is Cl3CNO2.

Chloropicrin is highly toxic to nontarget vertebrate species. Its vapours are irritating to the skin, eyes, and upper respiratory tract, and it has been used in chemical warfare and as a tear gas. It should be used only with appropriate personal protective equipment, including respirator, goggles and impervious gloves, overalls and footwear, with no skin exposed.

Chloropicrin was discovered in 1848 by Scottish chemist John Stenhouse. He prepared it by the reaction of sodium hypochlorite with picric acid:

Because of the precursor used, Stenhouse named the compound chloropicrin, although the two compounds are structurally dissimilar.

Today, chloropicrin is manufactured by the reaction of nitromethane with sodium hypochlorite:

or by the reaction of chloroform with nitric acid

Chloropicrin’s chemical formula is CCl3NO2 and its molecular weight is 164.38 grams/mole. It is a C-nitro compound, a one-carbon compound and an organochlorine compound. Pure chloropicrin is a colorless liquid, with a boiling point of 112 °C.

Chloropicrin is sparingly soluble in water with solubility of 2000 mg/L at 25 °C. It is a colorless liquid, that causes tears and vomiting and is used especially as a soil fumigant. It is volatile, with a vapor pressure of 23.2 millimeters of mercury (mmHg) at 25 °C; the corresponding Henry’s law constant is 0.00251 atmosphere-cubic meter per mole.

It is a severe irritant, and can cause immediate, severe inflammation of the eyes, nose and throat, and significant injuries to the upper and lower respiratory tract. Because of its toxicity and carcinogenicity, distribution and use of chloropicrin is available only to licensed professionals and specially certified growers who are trained in its proper and safe use.