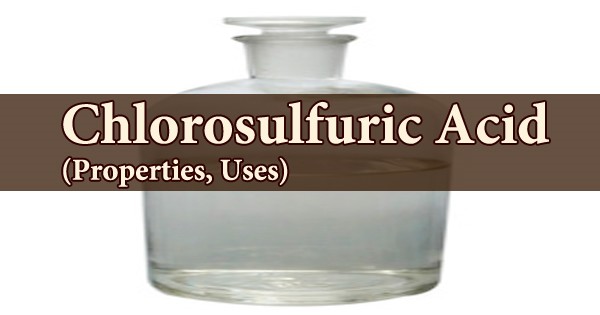 Chlorosulfuric acid (IUPAC name: sulfurochloridic acid) is a colorless to light yellow oily liquid also known as chlorosulfonic acid and sulfuric chlorohydrin. The inorganic compound with the formula HSO3Cl is what it is. It’s a colorless, distillable liquid that’s also hygroscopic and a potent lachrymator. It is made up of sulfur trioxide and hydrogen chloride, so it decomposes into hydrochloric acid and sulfuric acid when exposed to water. It’s a powerful dehydrator that’s used in the production of synthetic drugs, mustard gas, and saccharin.

According to a hazardous materials database maintained by the National Oceanic and Atmospheric Administration, chlorosulfonic acid is an inorganic substance that reacts “violently” with water and many combustible substances. It can seriously burn body tissue while it is in liquid form. Chlorosulfates are salts and esters of chlorosulfuric acid. Chlorosulfonic acid is a strong oxidizer. Water, strong mineral acids and bases, alcohols, and finely scattered organic matter react violently.

The molecule chlorosulfuric acid is tetrahedral. The formula is written SO2(OH)Cl, which is more descriptive, but HSO3Cl is more conventional. Chemically and conceptually, it is a bridge between sulfuryl chloride (SO2Cl2) and sulfuric acid (H2SO4). Pure forms of the compound are extremely rare. It decomposes into pyrosulfuryl chlorides when exposed to excess sulfur trioxide:

Sulfuric acid is chlorinated to produce chlorosulfuric acid, a tetrahedral molecule. The reaction of hydrogen chloride with a solution of sulfur trioxide in sulfuric acid is used in industrial synthesis.:

It can also be made by chlorinating sulfuric acid, which is written as HSO3(OH) instead of H2SO4 for educational purposes:

Chlorosulfonic acid produces poisonous hydrogen chloride and sulfur oxides when heated to decomposition. The phosphorus reaction accelerates out of balance, resulting in an explosion. When chlorosulfuric acid and 98 percent sulfuric acid are mixed, HCl is formed. It’s used to produce antibacterial and disinfectant agents, as well as synthetic sweeteners like saccharin, foam plastics, and some detergents and dyes.

Chlorosulfonic acid is a highly corrosive liquid with a sharp odor that is colorless to yellow, slightly cloudy, and fuming. It’s used to make the bile acid transporter inhibitor benzothiazepinylphosphonate. Often used to make sulfated guar gum, which has the ability to be used as an antioxidant. The benzoic acid derivative is formed by oxidizing the ortho isomer, which is then cyclized with ammonia and neutralized with base to yield saccharin. Alkyl sulfates, which are useful as detergents and chemical intermediates, are also made from it.

Chlorosulfonic acid is corrosive and irritating to the skin, lungs, and mucous membranes. It can cause serious acid burns. In either the liquid or vapor state, it may cause immediate toxic effects. Inhaling condensed vapor can cause loss of consciousness as well as severe lung tissue damage. If a liquid comes into contact with the eyes, it can cause serious burns if it is not removed immediately and completely. Owing to its extremely corrosive action, it also causes serious sh burns. Chlorosulfonic acid has been used to make smoke screens and as an anti-contrail agent in Ryan Model 147 surveillance drones.