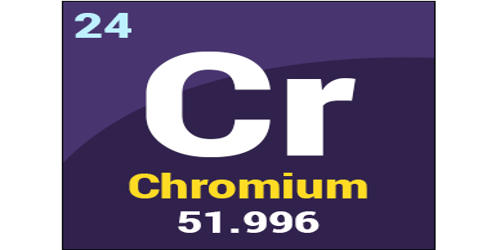 Chromium is a lustrous, brittle, hard metal. It is naturally found in compounds in the earth’s crust. It is a chemical element with the symbol Cr and atomic number 24. It is a transition metal in Group 6 on the Periodic Table of Elements. It is the first element in group 6. It is a steely-grey, lustrous, hard, and brittle transition metal. The green color of emerald, serpentine, and chrome mica and the red color of ruby are due to small amounts of chromium. Chromium is the main additive in stainless steel, to which it adds anti-corrosive properties. It is a relatively abundant element in Earth’s crust; the free metal is never found in nature. It is an essential trace element for humans because it helps us to use glucose. However, it is poisonous in excess.

Chromium is also highly valued as a metal that is able to be highly polished while resisting tarnishing. Polished chromium reflects almost 70% of the visible spectrum, with almost 90% of infrared light being reflected. It was discovered by Louis-Nicholas Vauquelin while experimenting with a material known as Siberian red lead, also known as the mineral crocoite (PbCrO4), in 1797. The name comes from the Greek word chroma, meaning “color,” because chromium compounds are many different colors.

It is widely dispersed in natural deposits, which are usually contaminated with oxygen, magnesium, aluminum, and silica; their chromium content varies from 42 to 56 percent. It is added to iron and nickel in the form of ferrochromium to produce alloys especially characterized by their high resistance to corrosion and oxidation.  Ferrochromium alloy is commercially produced from chromite by silicothermic or aluminothermic reactions and chromium metal by roasting and leaching processes followed by reduction with carbon and then aluminium.

Chromium metal is of high value for its high corrosion resistance and hardness. The metal is white, hard, lustrous, and brittle and is extremely resistant to ordinary corrosive reagents; this resistance accounts for its extensive use as an electroplated protective coating. A major development in steel production was the discovery that steel could be made highly resistant to corrosion and discoloration by adding metallic chromium to form stainless steel. Stainless steel and chrome plating (electroplating with chromium) together comprise 85% of the commercial use.

It is used extensively in automobile trim as chromium metal because of its shiny finish and corrosion resistance. s used to harden steel, manufacture stainless steel, and form many useful alloys. It is mostly used in plating to produce a hard, beautiful surface and to prevent corrosion. Chromium alloys are used to fabricate such products as oil tubing, automobile trim, and cutlery.