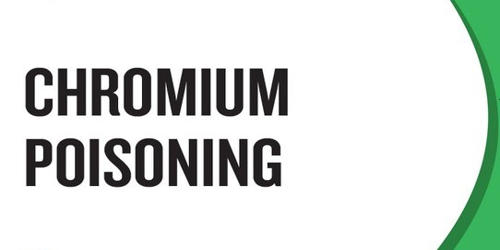 Chromium is a lustrous, brittle, hard metal. Chromium toxicity refers to any poisonous toxic effect in an organism or cell that results from exposure to specific forms of chromium—especially hexavalent chromium. Chromium(VI) is a danger to human health, mainly for people who work in the steel and textile industry. Hexavalent chromium and its compounds are toxic when inhaled or ingested. People who smoke tobacco also have a higher chance of exposure to chromium. Trivalent chromium is a trace mineral that is essential to human nutrition. There is a hypothetical risk of genotoxicity in humans if large amounts of trivalent chromium were somehow able to enter living cells, but normal metabolism and cell function prevent this. In the aquatic environment, Cr may suffer reduction, oxidation, sorption, desorption, dissolution, and precipitation

The health effects of chromium are primarily related to the valence state of the metal at the time of exposure. Chromium(VI) is known to cause various health effects. When it is a compound in leather products. The health hazards associated with exposure to chromium are dependent on its oxidation state. Major factors governing the toxicity of chromium compounds are oxidation state and solubility. The metal form (chromium as it exists in this product) is of low toxicity. After breathing it in chromium(VI) can cause nose irritations and nosebleeds. The hexavalent form is toxic. Cr(VI) compounds, which are powerful oxidizing agents and thus tend to be irritating and corrosive, appear to be much more toxic systemically than Cr(III) compounds, given similar amounts and solubilities. Adverse effects of the hexavalent form on the skin may include ulcerations, dermatitis, and allergic skin reactions. Acute poisoning is likely to occur through the oral route, whereas chronic poisoning is mainly from inhalation or skin contact. In animals, chromium can cause respiratory problems, a lower ability to fight disease, birth defects, infertility, and tumor formation.

The health hazards associated with exposure to chromium are dependent on its oxidation state. Although mechanisms of biological interaction are uncertain, this variation in toxicity may be related to the ease with which Cr(VI) can pass through cell membranes and its subsequent intracellular reduction to reactive intermediates. The metal form (chromium as it exists in this product) is of low toxicity. Characteristic clinical presentations of patients with Cr(VI) compound exposure include –