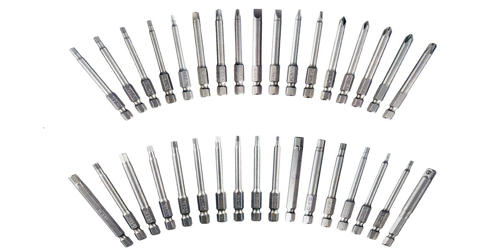 Chromium vanadium steel is an alloy tool steel with chromium (Cr) and vanadium (V) alloy elements. Chromium-vanadium steel (symbol Cr-V or CrV) is a group of steel alloys incorporating carbon (0.50%), manganese (0.70-0.90%), silicon (0.30%), chromium (0.80-1.10%), and vanadium (0.18%) as well as minuscule amounts of phosphorus and sulfur. It has better strength and toughness than carbon steel, so it is a great material for high-quality tools. Some forms can be used as high-speed steel. For example, 6150 is common chromium-vanadium steel with 0.50% carbon, which is what the 50 in 6150 indicates. At a temperature of about 660°C, vanadium can be easily oxidized in air.

Both chromium and vanadium are added in order to improve the mechanical properties of steel, hardness, strength, and wear resistance. Chromium-vanadium specifically means a family of steel alloys that, when used for hand tools, have a moderate amount of carbon, around 1% chromium, around 0.15% – 0.20% vanadium, and a range of other alloying elements. Typically, chrome vanadium contains a high amount of chromium, between 0.80 and 1.10 percent, and the vanadium content is approximately 0.18 percent, along with 0.70 to 0.90 percent of manganese. Commonly used for wrenches, screwdrivers, manual sleeves generally use 50BV30 chrome vanadium steel.  It is usually found in carbon-containing deposits that include coal, crude oil, tar sands, and oil shale.

In 1801, vanadium was discovered by Andres Manuel del Rio. It has good corrosion resistance, high strength at high temperature, and low density. Chromium and vanadium both make the steel more hardenable. Chromium also helps resist abrasion, oxidation, and corrosion. Chromium and carbon can both improve elasticity. Generally, it is used to make steel tools – wrenches, springs, gears, bearings, even blades.

Some common steel properties include the following: