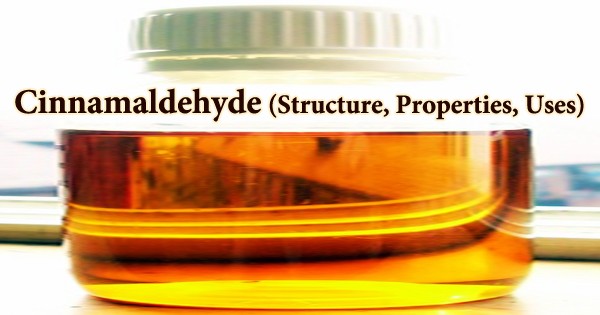 Cinnamaldehyde is an organic molecule with the formula C6H5CH=CHCHO that is a yellow oily liquid with a cinnamon odor and sweet flavor. It’s found in a wide range of foods, perfumes, and household products as a flavoring and aromatic component. It’s been used as a rubber reinforcing agent as well. Cinnamon’s flavor and odor are derived from the trans (E) isomer, which occurs naturally. It’s a phenylpropanoid produced by the shikimate pathway in the body.

This aromatic aldehyde has a searing taste that generates the odor and flavor of the spice. Cinnamaldehyde has also been used as an insect repellent, in the manufacture of corrosion inhibitors, and as a metal coating. In 1834, Jean-Baptiste Dumas and Eugène-Melchior Péligot extracted cinnamonaldehyde from cinnamon essential oil, and in 1854, Italian chemist Luigi Chiozza synthesized it in the lab. It functions as a hypoglycemic, an inhibitor of EC 4.3.1.24 (phenylalanine ammonia-lyase), a vasodilator, an antifungal, a flavoring ingredient, a plant metabolite, and a sensitizer.

Trans-cinnamaldehyde is a natural compound that consists of a benzene ring linked to an unsaturated aldehyde. It belongs to the cinnamaldehydes family and is a 3-phenylprop-2-enal. It is a natural ingredient of cinnamon leaves and bark, some essential oils, and other plant products, and is widely employed in industry. The deamination of L-phenylalanine into cinnamic acid by phenylalanine ammonia lyase (PAL) is the first step in the biosynthesis of cinnamaldehyde.

Cinnamic aldehyde is a flavoring agent and a fragrance ingredient in soft drinks, ice creams, dentifrices, pastries, chewing gum, and other products. It has the ability to cause contact urticaria as well as delayed-type responses. It’s been linked to contact dermatitis in people who work in the perfume industry or who work with food. Cinnamoyl-CoA is reduced to cinnamaldehyde by NADPH, which is mediated by CCR (cinnamoyl-CoA reductase).

Cinnamaldehyde has been approved by the Food and Drug Administration for use in allergenic epicutaneous patch tests, which are used to diagnose allergic contact dermatitis (ACD) in people aged 6 and up. It appears as a yellowish to greenish-yellow greasy liquid with a distinct, spicy cinnamon aroma. It’s insoluble in water and many organic solvents, but it’s soluble in alcohol and other flavoring oils. When exposed to air, the substance thickens and oxidizes. Cinnamaldehyde is absorbed 52 percent through the skin and has been proven to absorb quickly from the gut.

Cinnamaldehyde has also been used as an insect repellent, in the manufacture of corrosion inhibitors, and as a metal coating. It is a natural ingredient of cinnamon leaves and bark, some essential oils, and other plant products, and is widely employed in industry. The molecule can be made from similar compounds like cinnamyl alcohol (the alcohol version of cinnamaldehyde), but the aldol condensation of benzaldehyde and acetaldehyde was the first synthesis from unrelated substances.

Cinnamaldehyde can irritate the skin in varying degrees. Human skin was severely irritated after being exposed to 40 mg for 48 hours. The toxicity of this chemical on test subjects ranged from low to moderate, depending on the species and toxic pathways. It is largely processed and eliminated in the urine and, to a lesser extent, the feces. Within 24 hours after oral or intraperitoneal injection of cinnamaldehyde to rats and mice, 69–98% of the dosage was retrieved in the urine and feces.

Cinnamaldehyde is extensively distributed, and lignin is made up of similarly related molecules. All of these chemicals are biosynthesized from phenylalanine, which is converted first. The fragrance blend contains cinnamic aldehyde. It must be indicated by name in cosmetics in the EU as a scent allergy. Cinnamaldehyde is most commonly used as a flavor in chewing gum, ice cream, confectionery, eliquid, and beverages, with use levels ranging from 9 to 4,900 parts per million (ppm), or less than 0.5 percent.

Cinnamaldehyde is a recognized cinnarizine metabolite in humans. It’s also found in several natural, sweet, or fruity perfumes. Almond, apricot, butterscotch, and other odors may use the chemical in part to create their pleasant scents. Powdered beechnut husk aromatized with cinnamaldehyde can be marketed as powdered cinnamon as a food adulterant. Cinnamaldehyde is used as a brightener in electroplating procedures. Its effectiveness as an animal repellant, usage in compositions to attract insects, and proof of favorable antifungal action are among its other applications.