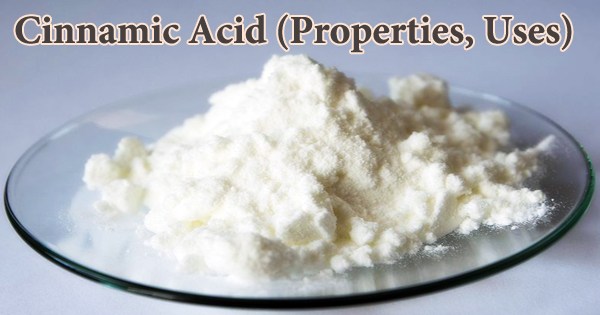 Cinnamic acid, also known as benzal acetate or 3-phenyl-2-propenoic acid, is an unsaturated aromatic acid that has a faint cinnamon scent; C6H5CH=CHCOOH is the formula for this chemical molecule. It’s a white crystalline chemical that’s water-insoluble but soluble in a variety of organic solvents. It’s a monocarboxylic acid made up of acrylic acid with a phenyl group at position three. It’s an unsaturated carboxylic acid that can be found in a variety of plants. It comes in both cis and trans isomers, with the latter being the more frequent.

Cinnamic acid is available in both cis and trans forms. The trans isomer, which occurs naturally and is the most common commercial product, is the more stable isomer. Cinnamomum cassia contains it. It functions as a metabolite in plants. It belongs to the styrenes and cinnamic acids families. It’s a cinnamate’s conjugate acid. It has a mild cinnamon fragrance and appears as white monoclinic prisms. It’s soluble in ethanol, methanol, petroleum ether, and chloroform; it’s also soluble in benzene, ether, acetone, acetic acid, carbon disulfide, and oils, but not water.

Cinnamic acid is a key intermediary in the production of lignols (precursors to lignin and lignocellulose), flavonoids, isoflavonoids, coumarins, aurones, stilbenes, catechin, and phenylpropanoids, among other natural products. Trommsdorf was the first to isolate cinnamic acid as crystals from cinnamon oil in 1780. He mistook it for benzoic acid. It was discovered in 1835 by Dumas and Peligot, and Bertagnini succeeded in synthesizing it from benzaldehyde and acetyl chloride in 1856.

Cinnamic acid produces styrene and carbon dioxide when heated. The olefinic double bond cleaves when heated with alkali or with oxidizing chemicals, yielding benzaldehyde. It has a honey-like odor, and it and its more volatile ethyl ester (ethyl cinnamate) are taste components in cinnamon essential oil, which is primarily composed of related cinnamaldehyde. Owing to the presence of a double bond, cinnamic acid has trans-/cis-two isomers with the cis form containing an extra three kinds of homogeneous polycrystalline.

Alcohol, ether, acetic acid, chloroform, and acetone are all soluble in cinnamic acid. Trans-isomer precipitated from dilute ethanol belongs to the monoclinic crystal and appears as white to pale yellow prismatic crystals with the relative density being 1.2475 (4 ℃), melting point being 133 ℃ and the boiling point being 300 ℃. Flavorings, synthetic indigo, and several medications include cinnamic acid. The perfume industry uses it as a precursor to make methyl cinnamate, ethyl cinnamate, and benzyl cinnamate.

It is primarily used to make methyl cinnamate, ethyl cinnamate, and the benzyl ester of cinnamic acid. It’s commonly used in the fragrance and medicinal industries. It has long been used as an insect repellant in medicine. Cinnamamic acid is converted into sodium benzoate in the liver after it is formed by the autooxidation of cinnamaldehyde. Cinnamic acid can also be used as a standard for organic trace analysis and double bond identification, as well as the separation of uranium, vanadium, and thorium.

Cinnamic acid is converted to phenylalanine via enzyme-catalyzed amination, making it a precursor to the artificial sweetener aspartame. In non-polar liquids, it can dimerize, resulting in distinct linear free energy correlations. Cinnamic acid is also used as a brightener in cyanide-free zinc electroplating baths, a corrosion inhibitor when removing scale from zinc and in aerosol cans, a low-toxicity heat stabilizer for poly(vinyl chloride), a cross-linking agent for dimethyl terephthalate ethylene glycol copolymer, and polyurethanes, and a low-toxicity heat stabilizer for poly(vinyl chloride); it is a fireproofing agent for polycaprolactam, in laundry-resistant polyurethane adhesives for polyester fibers, and for improvement of the storage stability of drying-oil-modified alkyd resin coatings.