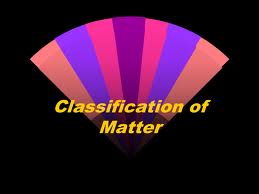 Classification of Matter is a sample of matter whose physical and chemical properties are the same throughout the sample because the matter has a constant composition. It is common to see substances changing from one state of matter to another.

Matter is anything that occupies space and has mass. There are three different States (forms) of matter:

The fourth state of matter is called plasma. Although this state is not common in earth and other planets most of the matter of the universe in the form of plasma. Plasma consists of high energy electrically charged particles and are some what like gases—they do not have definite volume or shape.

The kinetic theory of matter

According to kinetic theory of matter, all matter is made of tiny particles. These particles are in constant motion. The higher the temperature, the faster the motion. The motion and spacing of the particles determines the state of matter.

The particles of solid are packed very close together. Forces between the particles (intermolecular forces) hold them together in fixed arrangement. In solids, the particles move back and forth, but do not change positions.