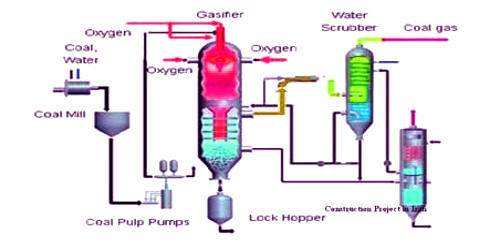 Coal is best known for its role supplying electricity throughout the world—nearly 200 country’s electricity comes from coal. Coal gasification is the process of producing syngas—a mixture consisting primarily of carbon monoxide (CO), hydrogen (H2), carbon dioxide (CO2), natural gas (CH4), and water vapor (H2O)—from coal and water, air and/or oxygen. Gasification, as opposed to combustion, is the most thermally efficient and cleanest way to convert the energy content of coal into electricity, hydrogen, clean fuels, and value-added chemicals.

Coal gasification is said to have greater efficiency than conventional coal-burning because it can effectively use the gases twice: the coal gases are first cleansed of impurities and fired in a turbine to generate electricity. Historically, coal was gasified to produce coal gas, also known as “town gas”. Coal gas is combustible and was used for heating and municipal lighting, before the advent of large-scale production of natural gas from oil wells. The product of gasification the syngasis a mixture of hydrogen and carbon monoxide. The hydrogen can also be extracted for use in fueling a hydrogen economy. 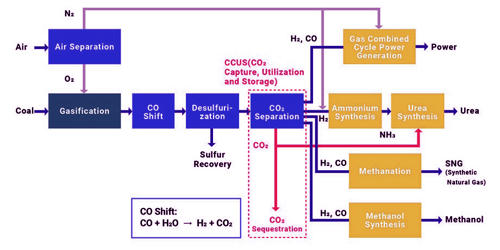 Gasification is a process through which carbon-based materials such as coal, petroleum coke, and biomass are converted into syngas that can be used to efficiently produce clean electricity, transportation fuels, and chemicals using domestic fuel resources. In current practice, large-scale coal gasification installations are primarily for electricity generation, or for the production of chemical feedstocks. The hydrogen obtained from coal gasification can be used for various purposes such as making ammonia, powering a hydrogen economy, or upgrading fossil fuels.

Coal gasification is a power-generation technology is gaining popularity due to the ready global availability of the raw material (coal), as well as positive environmental issues associated with this technology over other combustion technologies. Alternatively, coal-derived syngas can be converted into transportation fuels such as gasoline and diesel through additional treatment, or into methanol which itself can be used as transportation fuel or fuel additive, or which can be converted into gasoline. Cost-effective syngas clean-up technology is key to achieving near-zero emissions from gasification-based power generation and chemical plants. The main technology being used is coal gasification – instead of burning the fossil fuel, it is chemically transformed into synthetic natural gas (SNG).

Natural gas from coal gasification can be cooled until it liquifies for use as a fuel in the transport sector. Coal gas can also be converted into a transportation fuel as a substitute for gasoline in vehicles, but it is far less efficient than the current production and burning of petroleum-based gasoline.