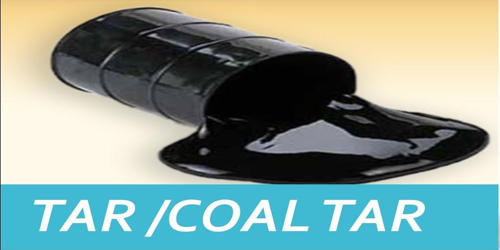 Coal tar is a complex mixture of hydrocarbons produced by the pyrolysis of coal. It is a thick dark liquid which is a by-product of the production of coke and coal gas from coal. It is a principal liquid product resulting from the carbonization of coal, i.e., the heating of coal in the absence of air, at temperatures ranging from about 900 to 1,200 °C. Tar acids, phenolic compounds that react with caustic soda to form water-soluble salts, are extracted from coal tar after it has been distilled. This compound is used as a wood preservative that acts as a fungicide and pesticide applied in a pressure treatment process, which involves pressurized treating cylinders that force pesticide penetration into the wood. Coal tar is used for medical and industrial purposes.

Coal tar fractions obtained at different temperatures had different carcinogenic properties. It has both medical and industrial uses. Medicinally it is a topical medication applied to the skin to treat psoriasis and seborrheic dermatitis (dandruff). It may be used in combination with ultraviolet light therapy. Industrially it is a railway tie preservative and used in the surfacing of roads. Many commercially important compounds are derived from coal tar. It is a complex mixture of a larger number of aromatic hydrocarbons (benzene, naphthalene, anthracene, phenanthrene, and their homologues), aromatic acids, and nitrogen-containing compounds and it transpired that it was better to study the carcinogenic effect of separate fractions obtained by distillation at different temperatures.

Coal tar constituents may be absorbed via inhalation, ingestion, or dermal contact. Side effects include skin irritation, sun sensitivity, allergic reactions, and skin discoloration.  Acute exposures may result in irritation of the eyes, skin, and respiratory tract. It is unclear if use during pregnancy is safe for the baby and use during breastfeeding is not typically recommended. Chronic exposure to coal tar can produce various skin lesions, including precancerous and cancerous growths. The exact mechanism of action is unknown. It is a complex mixture of phenols, polycyclic aromatic hydrocarbons (PAHs), and heterocyclic compounds. It is considered to be a human carcinogen; tumor induction can occur by inhalation, oral, and dermal exposure routes. It demonstrates antifungal, anti-inflammatory, anti-itch, and antiparasitic properties.

Coal tar was discovered around 1665 and used for medical purposes as early as the 1800s. It is on the World Health Organization’s List of Essential Medicines. Coal tar is available as a generic medication and over the counter. Tar bases are the alkaline constituents of distillate oils, remaining after tar acids have been removed. It is usually refined into coal tar pitch, which is used to make chemicals, roofing and road tar, pipe enamels, and binder pitch in the manufacture of baked anodes and graphite electrodes.