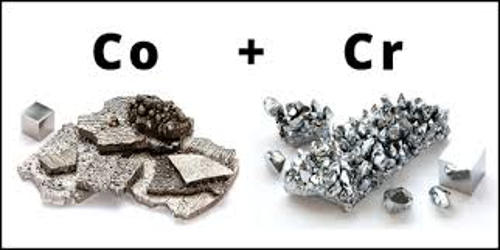 Cobalt-chrome (CoCr) as its name suggests, in general consists of chrome, cobalt, and other metals (molybdenum, nickel, etc.). It is also known as cobalt-chromium (CoCr) is a metal alloy of cobalt and chromium. It is a metal alloy that has outstanding strength, as well as wear and corrosion resistance. Cobalt-chrome has a very high specific strength and is commonly used in gas turbines, dental implants, and orthopedic implants. Because of these features and it’s biocompatibility, cobalt-chrome is often used for making dental/orthopedic implants and rings.

Cobalt chrome is a bright white metal with a brilliant luster. This metal’s weight is similar to precious metals, but many times harder and more durable. Co-Cr alloys show high resistance to corrosion due to the spontaneous formation of a protective passive film composed of mostly Cr2O3, and minor amounts of cobalt and other metal oxides on the surface. As its wide application in the biomedical industry indicates, Co-Cr alloys are well known for their biocompatibility. Due to its biocompatibility, wear-resistance, and chemical inertness, it’s widely applied in medicine and dentistry. Biocompatibility also depends on the film and how this oxidized surface interacts with a physiological environment.

Cobalt-chrome alloys are quite hard to machine. The hardness of Co-Cr alloys varies ranging 550-800 MPa, and tensile strength varies ranging 145-270 MPa. CoCr also has excellent mechanical properties including increased hardness and tensile strength. Moreover, tensile and fatigue strength increases radically as they are heat-treated. Cobalt-based alloys are used for manufacturing tools that are applied for injection molding of plastic parts using 3D printing. However, Co-Cr alloys tend to have low ductility, which can cause a component fracture. This is a concern as the alloys are commonly used in hip replacements. Such equipment can be produced with complex shapes, and the conformal cooling channels further enhance the tool’s life and increase productivity, part, and surface quality.

Co-Cr alloys are most commonly used to make artificial joints including knee and hip joints due to high wear-resistance and biocompatibility. The co-Cr alloy has also been widely used in the manufacture of the stent and other surgical implants as Co-Cr alloy demonstrates excellent biocompatibility with blood and soft tissues as well.

Co-Cr alloy dentures and cast partial dentures have been commonly manufactured since 1929 due to lower cost and lower density compared to gold alloys. The alloy is commonly used as a metal framework for dental partials. A well-known brand for this purpose is Vitallium.