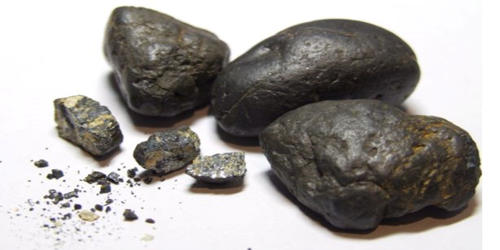 The mineral coltan is one of the resources that is playing an important role in the technological revolution. Coltan is a dull black metallic ore from which are extracted the elements niobium and tantalum. It is an ore from which niobium and tantalum are extracted. Coltan itself is a vessel for technology minerals tantalum and niobium. The niobium-dominant mineral in coltan is columbite (after niobium’s original American name columbium), and the tantalum-dominant mineral is the tantalite. It occurs in granitic pegmatites, pockets where the deep-seated molten rock crystallized last.

The name Coltan is derived from columbite-tantalite, known industrially as tantalite, with tantalum (Ta) as the principal chemical element. Tantalum is a rare, hard, blue-gray, lustrous transition metal that is highly corrosion-resistant. Tantalum from coltan is used to manufacture tantalum capacitors which are used for mobile phones, personal computers, automotive electronics, and cameras. Roughly two-thirds of tantalum is used to manufacture electronic capacitors, a fundamental component of smartphones, and other in-demand electronics. Coltan mining has financed serious conflict in the Democratic Republic of Congo, including the Ituri conflict and the Second Congo War. Approximately 80% of the world’s supply of Coltan is found in the Democratic Republic of Congo. It is found in a number of countries including Australia, Brazil, Canada, China, and the Democratic Republic of Congo (formerly Zaire).

Coltan is used primarily for the production of tantalum capacitors, used in many electronic devices. It may be an important mineral when it comes to the construction of electronics, but as mentioned above, the methods used to mine are not cutting edge at all. Tantalum has contributed hugely to the miniaturization of handheld electronic devices as it allows an electrical charge to be stored in small capacitors. Tantalum capacitors are used in almost all cell phones, laptops, pagers, and many other electronics. Coltan is important in the production of mobile phones; and tantalum capacitors that are used in almost every kind of electronic device. Niobium and tantalum have a wide range of uses, including refractive lenses for glasses, cameras, phones, and printers. The two-man products include cell phones and laptops, though it is found in other electronics as well. They are also used in semiconductor circuits, and capacitors for small electronic devices such as hearing aids, pacemakers, and MP3 players.

Coltan is also used to make high-temperature alloys for jet engines, air-based turbines, and land-based turbines. It is used mainly in the manufacture of condensers and micro-electronic technology (chips and processors), cell phones, and nuclear reactors.