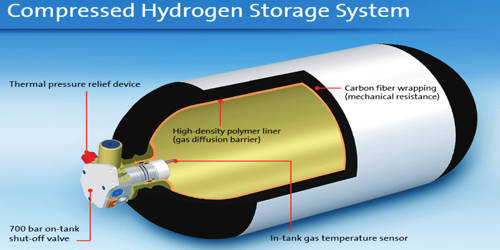 Compressed hydrogen (CH2, CGH2 or CGH2) is the gaseous state of the element hydrogen kept under pressure. Compressed hydrogen in hydrogen tanks at 350 bar (5,000 psi) and 700 bar (10,000 psi) is used for mobile hydrogen storage in hydrogen vehicles. In the compressed hydrogen storage approach, hydrogen is saved in the form of gas, with high pressure. It must be stored in specially designed tanks capable of withstanding the storage pressures, which can range from 17 MPa to 70 MPa. It is used as fuel gas. Hydrogen is the most abundant element in the universe; however, here on the surface of the Earth, pure hydrogen gas is relatively rare. On the other hand, storing hydrogen in materials involves the use of metal hydride, sorption materials, and chemical hydride. The density of hydrogen at elevated pressure can be estimated using the principles of thermodynamics. It can be easily observed that hydrogen density does not follow a linear function over the increase of pressure. Prepare the Hydrogen source and make sure that it is working properly and efficiently to supply enough gas to transfer to the compressor.

The compressed hydrogen is stored in a tank composed of a polymer liner and a composite structure that supports the mechanical forces. It is considered to be a solution for hydrogen storage on automotive systems due to the relative simplicity of gaseous hydrogen, rapid refueling capability, excellent dormancy characteristics, and low infrastructure impact. It can be transported by trucks in gas cylinders or gas tubes with pressures between 200 and 500 bar. The most common storage system is high-pressure gas steel cylinders, which are operated at a maximum pressure of 200 bar. A hydrogen density of 20 kg/m3 is reached at 300 bar.

The compressed hydrogen is stored in a tank composed of a polymer liner and a composite structure that supports the mechanical forces. Usually, several cylinders or tubes are bundled to modules in a 20′ or 40′ container that is mounted on a trailer. Hydrogen gas is highly flammable and burns with an almost colorless flame that could cause accidental fires and you should, therefore, handle it with caution. A feasible hydrogen economy has to be supported by the development of an efficient and economical method of storing and transporting hydrogen.