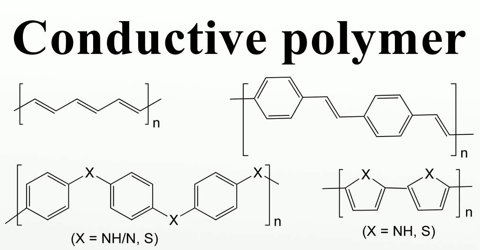 Conductive Polymers are organic polymers that conduct electricity. A novel type of electroactive biomaterial, the conductive polymer, promises to become one such material. Conductive polymers are already used in fuel cells, computer displays and microsurgical tools, and are now finding applications in the field of biomaterials. These versatile polymers can be synthesised alone, as hydrogels, combined into composites or electrospun into microfibres. The biggest advantage of conductive polymers is their processability, mainly by dispersion. Conductive polymers are generally not thermoplastics, i.e., they are not thermoformable. But, like insulating polymers, they are organic materials. They can offer high electrical conductivity but do not show similar mechanical properties to other commercially available polymers. The electrical properties can be fine-tuned using the methods of organic synthesis and by advanced dispersion techniques.

The basic properties of conductive polymers, their chemical and electrochemical synthesis, the phenomena underlying their conductivity and the ways to tailor their properties (functionalization, composites, etc.) are discussed.

It was first described in Polyaniline in mid-19th century by Henry Letheby, and developed gradually since then. Not until recently in 2000, when a Nobel Prize in Chemistry is given for the discovery and development of high conductive oxidized iodine-doped polyacetylene, conductive polymers has come under the spotlight of electrical field.

Conductivity can be defined simply by Ohms Law. Where R is the resistance, I the current and V the voltage present in the material. The conductivity depends on the number of charge carriers (number of electrons) in the material and their mobility.In a metal it is assumed that all the outer electrons are free to carry charge and the impedance to flow of charge is mainly due to the electrons “bumping” in to each other.

Insulators however have tightly bound electrons so that nearly no electron flow occurs so they offer high resistance to charge flow.  So for conductance free electrons are needed.

Properties and Applications of Conductive Polymers Due to their poor processability, conductive polymers have few large-scale applications. They have promise in antistatic materials and they have been incorporated into commercial displays and batteries, but there have been limitations due to the manufacturing costs, material inconsistencies, toxicity, poor solubility in solvents, and inability to directly melt process. Literature suggests they are also promising in organic solar cells, printing electronic circuits, organic light-emitting diodes, actuators, electrochromism, supercapacitors, chemical sensors and biosensors, flexible transparent displays, electromagnetic shielding and possibly replacement for the popular transparent conductor indium tin oxide. Another use is for microwave-absorbent coatings, particularly radar-absorptive coatings on stealth aircraft. Conducting polymers are rapidly gaining attraction in new applications with increasingly processable materials with better electrical and physical properties and lower costs. The new nanostructured forms of conducting polymers particularly augment this field with their higher surface area and better dispersability.

Since most conductive polymers require oxidative doping, the properties of the resulting state are crucial. Such materials are salt-like (polymer salt), which diminishes their solubility in organic solvents and water and hence their processability. Furthermore, the charged organic backbone is often unstable towards atmospheric moisture. The poor processability for many polymers requires the introduction of solubilizing or substituents, which can further complicate the synthesis. Applications and Feasibility of Non Metallic Conductors and Semiconductors

Technically, conductive polymers can be applied in all the use cases of conventional metallic materials. While metal mining, processing, and shipping can be expensive, conductive polymer is the most attractive alternative at the moment, because they are light, cheap, and easily made flexible.

Because of its potential in antistatic materials, other uses of conductive polymers, which are still in research and development: antistatic coating, antistatic substance for conventional photographic film, highly compact capacitor, etc.