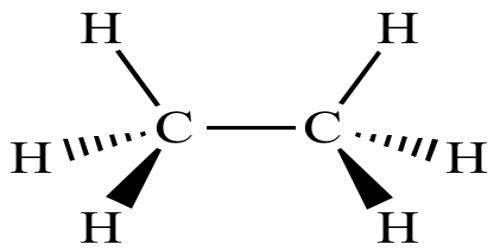 Conformations that correspond to local maxima on the energy surface are the transition states between the local-minimum conformational isomers. Isomers are compounds with the same molecular formulae but that are structurally different in some way. Conformational isomers are stereoisomers produced by rotation (twisting) about σ bonds and are often rapidly interconverting at room temperature. Rotations about single bonds involve overcoming a rotational energy barrier to interconvert one conformer to another. It is important to be able to recognize isomers because they can have different chemical, physical properties, and biological properties. If the energy barrier is low, there is free rotation and a sample of the compound exists as a rapidly equilibrating mixture of multiple conformers; if the energy barrier is high enough then there is restricted rotation, a molecule may exist for a relatively long time period as a stable rotational isomer or rotamer. When the time scale for interconversion is long enough for isolation of individual rotamers, the isomers are termed atropisomers. The ring-flip of substituted cyclohexanes constitutes another common form of conformational isomerism. For example, eclipsed, gauche, and anti butane are all conformational isomers of one another.

Conformational isomers are thus distinct from the other classes of stereoisomers (i. e. configurational isomers) where interconversion necessarily involves breaking and reforming of chemical bonds. For example, L/D- and R/S- configurations of organic molecules have different handedness and optical activities, and can only be interconverted by breaking one or more bonds connected to the chiral atom and reforming a similar bond in a different direction or spatial orientation. The number of different conformers depends on the number of single bonds and on the number and size of the flexible rings. They also differ from geometric (cis/trans) isomers, another class of stereoisomers, which require the π-component of double bonds to break for interconversion. Due to rapid interconversion, conformers are usually not isolable at room temperature.