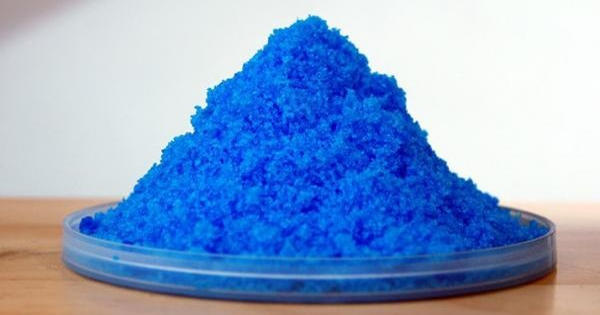 Copper hydroxide is the hydroxide of copper with the chemical formula of Cu(OH)2. It is also called cupric hydroxide is a pale blue precipitate produced when sodium or potassium hydroxide is added in excess to a solution of a copper salt. It is a pale greenish-blue or bluish-green solid.

It is crystalline but inert compound used in the preparation of a wide variety of salts. Some forms of copper hydroxide are sold as “stabilized” copper(II) hydroxide, although they likely consist of a mixture of copper(II) carbonate and hydroxide. It is prepared by adding just sufficient aqueous ammonia to cupric sulphate to hold the copper in solution and then precipitating the hydroxide either by the addition of an equivalent quantity of alkali by removing ammonia from the solution using a dessicator. Cupric hydroxide is a strong base, although its low solubility in water makes this hard to observe directly.

Copper hydroxide reacts with sulfuric acid forms copper sulfate and water. The chemical equation is given below:

Copper hydroxide reacts with nitric acid forms copper nitrate and water. The chemical equation is given below:

Copper(II) hydroxide has been known since copper smelting began around 5000 BC although the alchemists were probably the first to manufacture it by mixing solutions of lye (sodium or potassium hydroxide) and blue vitriol (copper(II) sulfate).[3] Sources of both compounds were available in antiquity.

It was produced on an industrial scale during the 17th and 18th centuries for use in pigments such as blue verditer and Bremen green. These pigments were used in ceramics and painting.