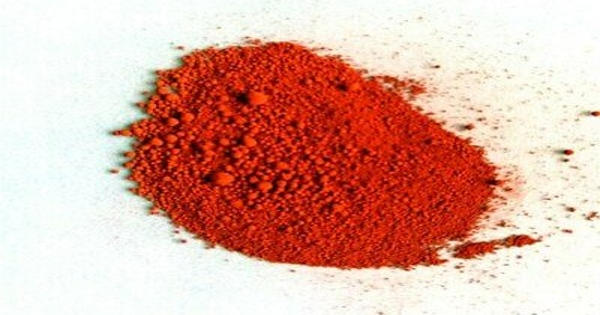 Copper(I) oxide, also known as cuprous oxide is an inorganic compound with the formula Cu2O.  It is covalent in nature. It is one of the principal oxides of copper, the other being or copper (II) oxide or cupric oxide (CuO). It crystallizes in a cubic structure. This red-colored solid is a component of some antifouling paints. The compound can appear either yellow or red, depending on the size of the particles. It acts as good corrosion resistance, due to reactions at the surface between the copper and the oxygen in the air to give a thin protective oxide layer.

Copper(I) oxide is found as the reddish mineral cuprite. When the cupric oxide is gently heated with metallic copper, it is converted into cuprous oxide.

Cu2O crystallizes in a cubic structure with a lattice constant al = 4.2696 Å. It is easily reduced by hydrogen when heated It undergoes disproportionation in acid solutions producing copper(II) ions and copper. The copper atoms arrange in a fcc sublattice, the oxygen atoms in a bcc sublattice. One sublattice is shifted by a quarter of the body diagonal.

The solid is diamagnetic. In terms of their coordination spheres, copper centers are 2-coordinated and the oxides are tetrahedral. The structure thus resembles in some sense the main polymorphs of SiO2, and both structures feature interpenetrated lattices.

Copper(I) oxide may be produced by several methods. Most straightforwardly, it arises via the oxidation of copper metal:

Additives such as water and acids affect the rate of this process as well as the further oxidation to copper(II) oxides. It is also produced commercially by reduction of copper(II) solutions with sulfur dioxide. Aqueous cuprous chloride solutions react with base to give the same material. In all cases, the color is highly sensitive to the procedural details.

Formation of copper(I) oxide is the basis of the Fehling’s test and Benedict’s test for reducing sugars. These sugars reduce an alkaline solution of a copper(II) salt, giving a bright red precipitate of Cu2O.

It forms on silver-plated copper parts exposed to moisture when the silver layer is porous or damaged. This kind of corrosion is known as red plague.