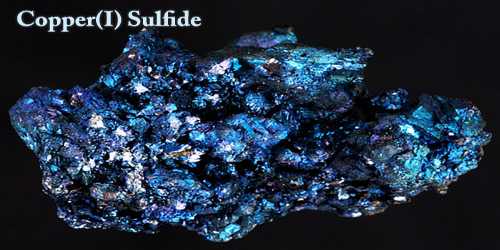 Copper(I) sulfide is a copper sulfide, which is known as mineral chalcocite in nature. Copper and sulfur is a chemical compound; it has the chemical formula Cu2S. The sulfide or copper look of copper(I) is insoluble in water but decomposes in nitric acid and concentrated sulfuric acid. It occurs naturally as the mineral chalcocite is blue or gray.

Copper(I) sulfide is prepared by heating mixtures of copper and sulfur in a hydrogen atmosphere or by precipitation of a hydrogen sulfide or alkali sulfide copper(II) ammine salt solution. It has a narrow range of stoichiometry ranging from Cu1.997S to Cu2.000S. It is used in lubricants, solar cells, semiconductors, and paints with light. 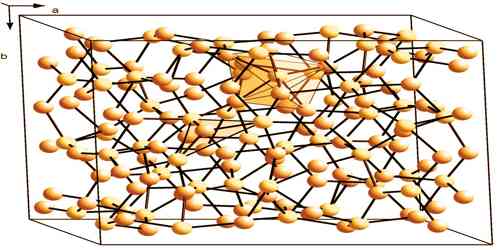 Copper(I) sulfide (Cu2S) can be strongly prepared in sulfur vapor or H2S by heating the metal (copper). In nature, the compound occurs as a mineral chalcocite (copper look) with varying colors. Copper powder reaction in molten sulfur quickly yields Cu2S, while copper pellets need much higher temperatures.Cu2S reacts with oxygen to form SO2:

Often used in luminous paints is copper(I) sulfide; antifouling paints; in solid lubricant mixtures; in solar cells; in electrodes; and as a catalyst. In the production of copper two-thirds of the molten copper, sulfide is oxidized as above, and the Cu2O reacts with un-oxidized Cu2S to give Cu metal:

Alternatively, copper(I) sulfide is also prepared by heating copper with hydrogen sulfide and hydrogen; or by heating the metal with sulfur in an environment of dioxide and methanol vapor. There are two varieties of Cu2S: a low-temperature monoclinic form (“low-chalcocite”) which features a complex structure with 96 copper atoms within the unit and a hexagonal form stable above 104 °C. Copper(I) sulfide decomposes when heated with nitric acid, forming copper nitrate and hydrogen sulfide. In aqueous solutions that contain cyanide ions, the compound dissolves forming soluble copper-cyanide complexes.

In aqueous solutions containing soluble copper polysulfides, copper(I) sulfide reacts also with polysulfide anions. There is also a crystallographically differentiated phase (mineral djurleite) with stochiometry Cu1.96S which is non-stoichiometric (range Cu1.934S-Cu1.965S) and has a monoclinical structure in the unit cell with 248 copper and 128 sulfur atoms. The Cu2S and Cu1.96S tend to be identical and difficult to differentiate from one another. Copper(I) sulfide (Cu2S) is a dark-blue or black orthogonal crystal; insoluble in water; mildly soluble in hydrochloric acid; decomposed by nitric acid and condensed sulphuric acid; moderately soluble in ammonium hydroxide; dissolves in potassium-cyanide solutions.