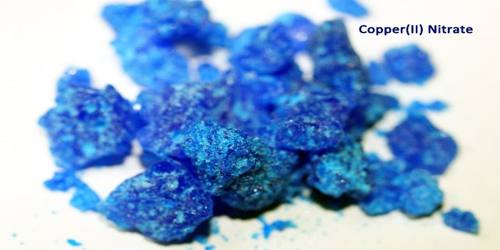 Copper(II) nitrate is the chemical compound with the formula Cu(NO3)2, which is commonly referred to simply as copper nitrate, the anhydrous form is a blue, crystalline solid. Anhydrous copper nitrate forms deep blue-green crystals and sublimes in a vacuum at 150-200 °C. Copper nitrate also occurs as five different hydrates, the most common ones being the trihydrate and hexahydrate. Hydrated copper nitrate can be prepared by hydration of the anhydrous material or by treating the copper metal with an aqueous solution of silver nitrate or concentrated nitric acid:

Anhydrous Cu(NO3)2 forms when copper metal is treated with N2O4:

Natural basic copper nitrates include the rare minerals gerhardtite and rouaite, both being polymorphs of Cu2(NO3)(OH)3 substance. Copper forms compounds in the oxidation states of +1 (cuprous) and +2 (cupric); trivalent copper survives no more than a few seconds in an aqueous solution. The relatively small change in electrochemical potential between the cuprous and cupric ions in solution gives the usefulness of copper compounds in chemical reactions.

Anhydrous copper(II) nitrate has been crystallized in two solvate-free polymorphs. α- and β-Cu(NO3)2 are fully 3D coordination polymer networks. The alpha form has only one Cu environment, with [4+1] coordination, but the beta form has two different copper centers, one with [4+1] and one that is square planar. The nitromethane solvate also features “[4+ 1] coordination”, with four short Cu-O bonds of approximately 200 pm and one longer bond at 240 pm. Copper nitrate, in combination with acetic anhydride, is an effective reagent for nitration of aromatic compounds, under what is known as “Menke conditions”, in honor of the Dutch chemist who discovered that metal nitrates are effective reagents for nitration. Hydrated copper nitrate absorbed onto clay affords a reagent called “claycop”. The resulting blue clay is used as a slurry, for example for the oxidation of thiols to disulfides. Claycop is also used to convert dithioacetals to carbonyls. A related reagent based on Montmorillonite has proven useful for the nitration of aromatic compounds.