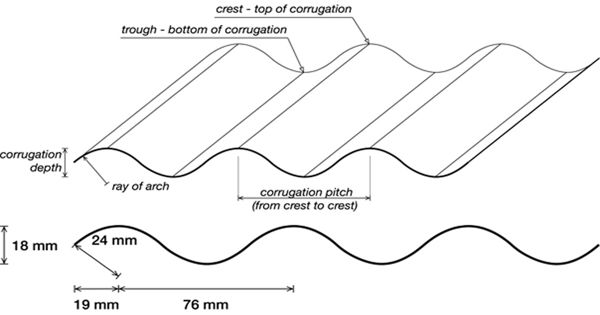 Corrugated Galvanized Iron (CGI) is a metal for roofs and walls that stays strong and repels rust when it gets special treatment. This iron, or steel colloquially corrugated iron (near universal), wriggly tin (taken from UK military slang), and occasionally abbreviated CGI) is a building material composed of sheets of hot-dip galvanized mild steel, cold-rolled to produce a linear corrugated pattern in them. CGI sheets are very popular in all parts of the world, except in the high mountains.

Corrugated Galvanized Iron or steel (CGI) sheets are used for general roofing purposes. It is sheet metal formed into ridges and hollows, which increases its rigidity.

Corrugated Galvanized Iron are a lightweight roofing material made of thin sheets, stiffened by corrugations. Although it is still popularly called “iron” in the UK, the material used is actually steel (which is iron alloyed with carbon for strength, commonly 0.3% carbon), and only the surviving vintage sheets may actually be made up of 100% iron. It is sheet metal formed into ridges and hollows, which increases its rigidity. The process of galvanizing coats the iron with zinc to keep rust at bay.

Sheet metal is metal formed by an industrial process into thin, flat pieces. CGI is lightweight and easily transported. Zinc coating thickness and method of galvanization are the most important factors for durability. It was and still is widely used especially in rural and military buildings such as sheds and water tanks. CGI sheets are protected from corrosion by a zinc coating applied to the steel sheet. It is one of the fundamental forms used in metalworking and it can be cut and bent into a variety of shapes.

It is highly recommended to use measurement in millimetre instead of gauge when ordering or purchasing CGI sheets, as the conversion of galvanized steel sheets can be confusing. Its unique properties were used in the development of countries like Australia from the 1840s, and it is still helping developing countries today.