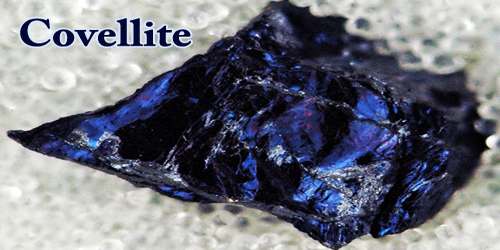 Covellite, also known as ‘covelline’, is a mineral of cupric sulfide (CuS) and is copper ore. This indigo blue mineral is generally a secondary mineral in small abundance and is well known to mineral collectors although it is not a significant ore of copper itself. Covellite is named after the Italian mineralogist Niccolo Covelli who first discovered the mineral. The mineral is typically present in deposits of copper sulfide in the secondary enrichment (supergene) areas.

Iridescent Covellite is extremely prized among collectors, especially when in rare crystallized form. It often occurs as pseudomorphic replacements of other minerals, commonly found as coatings on chalcocite, chalcopyrite, bornite, enargite, pyrite, and other sulfides. Covellite typically occurs as an alteration product of other copper sulfide minerals (chalcopyrites, chalcocite, and bornite) present within the same deposits, as at Leogang, Austria; Kawau Island, N.Z.; and Butte, Mont., U.S. Covellite forms crystals that belong to the hexagonal system.

Finding crystal-shaped covellite is extremely rare, and can sell for thousands of dollars. Research into its unique properties has only increased in the past decade, yet promising results suggest that wide-scale applications may be used in the future in some specific applications. The colors of Covellite range from a deep blueness to a dark purple. Both of those colors will be seen with natural iridescence which usually draws immediate attention. 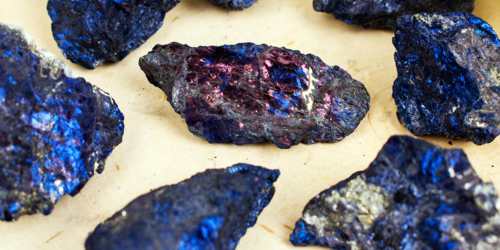 Covellite belongs to the group of binary copper sulfides, which has the CuxSy formula and can have a broad copper/sulfur ratio, from 1:2 to 2:1 (Cu / S). The rare crystals are often in small, hexagonal tabular plates. Usually, they are bladed and finished doubly. Most often platy, grainy, foliated, as coatings, in veins, and large. Covellite forms a complex lamellar structure for a copper sulfide, with alternating layers of CuS and Cu2S2 with trigonal planar (uncommon) and tetrahedral coordination copper atoms, respectively.

Covellite is present all over the world in small quantities in countries such as Italy, Brazil, Austria, Argentina, China, Australia, and the United States. A couple of mines in Montana have pulled out some of the world’s finest Covellite specimens. It is known to form in surface deposits where copper is the predominant sulfide, in weathering conditions. As a primary mineral, the formation of covellite is restricted to hydrothermal conditions, thus rarely found intrinsically in copper ore deposits or as a volcanic sublimate.

Covellite is a small copper rock in copper deposits; brightly colored covellite is used as a mineral for a collector. The peculiar crystal structure of Covellite is related to the complex conditions of its oxidative formation, as seen while trying to synthesize covellite. It is a very strong stone that lets us tie between the physical and etheric worlds. Uses of covellite CuS superconductivity research are commonly used in cathodes of lithium batteries, ammonium gas sensors, and thin-film metal chalcogenide solar electric cells. Covellite is the perfect stone for any psychic, medium, channeller, scribe, reiki, and therapist.