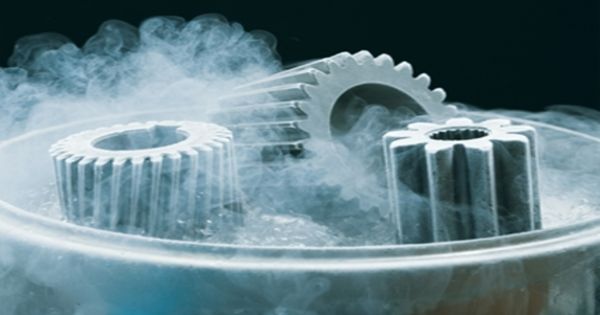 Cryogenics is the production of and behavior of materials at very low temperatures. Cryogenic treatment is the process of treating workpieces to cryogenic temperatures (i.e. below −190 °C (−310 °F)) in order to remove residual stresses and improve wear resistance on steels and even composites. It is any form of treatment using freezing or near-freezing temperatures. Cryogenic liquids have boiling points less than -73ºC (-100ºF). Liquid nitrogen, liquid oxygen, and carbon dioxide are the most common cryogenic materials used in the laboratory. Hazards may include fire, explosion, embrittlement, pressure buildup, frostbite, and asphyxiation.

Cryogenic treatment is the process of cooling materials to cryogenic temperatures temporarily to improve their material properties at room temperature.

This treatment is performed by slowly cooling the parts in a controlled bath of liquid nitrogen or other refrigerants, and holding the parts until the temperature has reached the target temperature, then returning the part to room temperature. When tools and other heat-treated metals are cooled to very cold temperatures, -120°F or below, unstable phases are transformed, making the part very stable at normal use temperatures. The resulting part will have a low distortion tendency and often is significantly stronger and tougher.

In addition to seeking enhanced stress relief and stabilization, or wear resistance, cryogenic treatment is also sought for its ability to improve corrosion resistance by precipitating micro-fine eta carbides, which can be measured before and after in a part using a quantimet. Ultra-cold temperatures change the chemical properties of materials, which provides an interesting area of study for researchers who wish to examine the materials as they transition from gas to liquid to a solid-state. In cryogenic treatment, materials are treated at -196°C for a soaking period of 24 hours. It has shown significant changes in the microstructure and mechanical properties of materials.

The process has a wide range of applications from industrial tooling to the improvement of musical signal transmission. For example, while water transforms from a liquid to a solid at 32° F (0°C), cryogenic temperatures range much lower; from -150°C to -273°C. The temperature -273° C is the absolute lowest that can be achieved. At this temperature, the actions of all molecules stop, causing the molecules to be at the lowest possible state of energy.

Cryogenics is used in a variety of applications. Cryogenic treatment is a very active area of research that has produced many reproducible and industrially useful results. Some of the benefits of cryogenic treatment include longer part life, less failure due to cracking, improved thermal properties, better electrical properties including less electrical resistance, reduced coefficient of friction, less creep and walk, improved flatness, and easier machining. It can be used to produce cryogenic fields for rockets, in MRI machines that use liquid helium and require cryogenic cooling, storing large quantities of food, special effects fog, recycling, freezing blood and tissue samples, and even cooling superconductors.