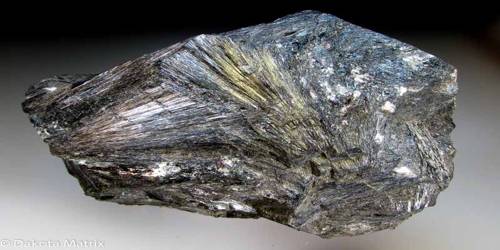 Cummingtonite is a metamorphic amphibole with the chemical composition (Mg, Fe2+)2(Mg, Fe2+)5 Si8O22 (OH)2, magnesium iron silicate hydroxide. It is an amphibole mineral, an iron and magnesium silicate that occurs in metamorphic rocks. It is an important mineral which is also recognized as a middle member of the series of minerals by the same name. These series includes magnesio cummingtonite and grunerite.

It was named after the town of Cummington, Massachusetts, where it was discovered in 1824. It is also found in Sweden, South Africa, Scotland, and New Zealand.

Monoclinic cummingtonite is compositionally similar and polymorphic with orthorhombic anthophyllite, which is a much more common form of magnesium-rich amphibole, the latter being metastable. Cummingtonite shares few compositional similarities with alkali amphiboles such as arfvedsonite, glaucophane-riebeckite. There is little solubility between these minerals due to different crystal habit and inability of substitution between alkali elements and ferromagnesian elements within the amphibole structure.

Cummingtonite has also been found in some felsic volcanic rocks such as dacites. Manganese-rich species can be found in metamorphosed Mn-rich rock units. The grunerite end member is characteristic of the metamorphosed iron formations of the Lake Superior region and the Labrador Trough. With prograde metamorphism cummingtonite and grunerite morph to members of the olivine and pyroxene series.