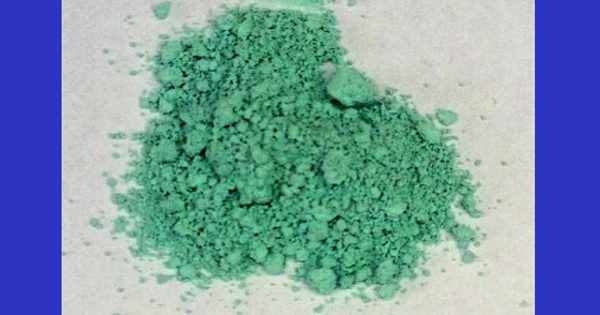 Cupric carbonate, also known as copper(II) carbonate, is a chemical compound with the formula CuCO3. It is a water-insoluble Copper source that, when heated, easily converts to other Copper compounds such as oxide (calcination). It is an ionic solid (a salt) at room temperature, composed of copper(II) cations Cu2+ and carbonate anions CO32-.

This compound is rarely encountered because it is difficult to prepare and readily reacts with water moisture from the air. The terms “copper carbonate,” “copper(II) carbonate,” and “cupric carbonate” almost always refer to a basic copper carbonate (or copper(II) carbonate hydroxide), such as Cu2(OH)2CO3 (which occurs naturally as the mineral malachite) or Cu3(OH)2(CO3)2 (azurite). As a result, the qualifier neutral may be used instead of “basic” to refer specifically to CuCO3.

The stability of dry CuCO3 depends critically on the partial pressure of carbon dioxide (pCO2). It is stable for months in dry air but decomposes slowly into CuO and CO2 if pCO2 is less than 0.11 atm.

In the presence of water or moist air at 25°C, CuCO3 is stable only for pCO2 above 4.57 atmospheres and pH between about 4 and 8. Below that partial pressure, it reacts with water to form a basic carbonate.

In highly basic solutions, the complex anion Cu(CO3)22- is formed instead.

It can be produced by exposing Cupric Carbonate to air, which results in copper(II) carbonate. It can also be produced by combining copper sulfate and sodium carbonate. This results in the formation of sodium sulfate in the solution. Due to the high affinity of the Cu2+ ion for the hydroxide anion HO, reactions that should yield CuCO3, such as mixing solutions of copper(II) sulfate CuSO4 and sodium carbonate Na2CO3, instead of yield a basic carbonate and CO2.

Thermal decomposition of the basic carbonate at atmospheric pressure yields copper(II) oxide CuO rather than the carbonate.

C. W. F. T. Pistorius claimed synthesis in 1960 by heating basic copper carbonate at 180 °C for 36 hours in an atmosphere of carbon dioxide CO2 (450 atm) and water (50 atm). Hartmut Ehrhardt and colleagues reported the first reliable synthesis of true copper(II) carbonate in 1973. The compound was obtained as a gray powder by heating basic copper carbonate at 500°C and 2 GPa in a carbon dioxide atmosphere (produced by the decomposition of silver oxalate Ag2C2O4) (20,000 atm). It was discovered that the compound has a monoclinic structure.

Cupric Carbonate can be used to kill algae. It is also used as a pigment.

It can irritate the skin. It is toxic since it dissolves in stomach acid to make copper ions in solution, which can be absorbed.