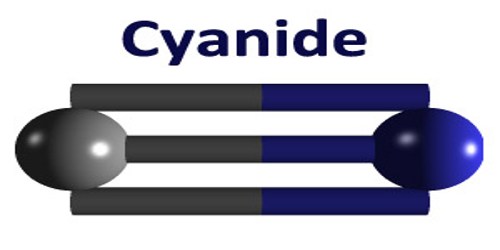 Cyanide is any of a large group of chemical compounds containing the radical CN, especially the very poisonous salts sodium cyanide and potassium cyanide. It is found abundantly in nature as well as in man-made materials. Examples include the seeds of apples and peaches, as well as cigarette smoke and extermination materials for pests. It’s also present in the air when a building is burning down, usually because plastic things – which contain cyanide – are burning. Cyanide kills by depriving the body of oxygen. In inorganic cyanides, such as sodium cyanide (NaCN), this group is present as the negatively charged cyanide ion; these compounds, which are regarded as salts of hydrocyanic acid, are highly toxic. Organic cyanides are usually called nitriles; in these, the CN group is linked by a covalent bond to a carbon-containing group, such as methyl (CH3) in methyl cyanide (acetonitrile). Hydrocyanic acid, also known as hydrogen cyanide, or HCN, is a highly volatile liquid that is produced on a large scale industrially. It is obtained by acidification of cyanide salts.

Cyanides are used to make plastics and to extract and treat metals. Organic cyanides are usually called nitriles. In nitriles, the CN group is linked by a covalent bond to carbon.

Occurrences and Properties of Cyanide

Cyanides are employed in a number of chemical processes, including fumigation, case hardening of iron and steel, electroplating, and the concentration of ores. In nature, substances that can be chemically converted into cyanide are present in certain seeds, such as the pit of the black cherry (Prunus serotina) and the seeds of apples (Malus domestica).

The cyanide radical CN· has been identified in interstellar space. The cyanide radical also called cyanogens, which is used to measure the temperature of interstellar gas clouds. Hydrogen cyanide is produced by the combustion or pyrolysis of certain materials under oxygen-deficient conditions. For example, it can be detected in the exhaust of internal combustion engines and tobacco smoke. Certain plastics, especially those derived from acrylonitrile, release hydrogen cyanide when heated or burnt. The cyanide ion doesn’t exist alone and common forms of cyanide are hydrogen cyanide (HCN), which is normally breathed in as a gas, and the crystalline salts of potassium cyanide (KCN) and sodium cyanide (NaCN), which can be consumed in, or with, food and drink.

The principal process used to manufacture cyanides is the Andrussow process in which gaseous hydrogen cyanide is produced from methane and ammonia in the presence of oxygen and a platinum catalyst.

Uses and Effects of Cyanide

Cyanide is mainly produced for the mining of gold and silver: It helps dissolve these metals and their ores. In the cyanide process, finely ground high-grade ore is mixed with the cyanide (concentration of about two kilogram NaCN per tonne); low-grade ores are stacked into heaps and sprayed with a cyanide solution (concentration of about one kilogram NaCN per ton). Some nitriles are produced on a large scale, e.g., adiponitrile is a precursor to nylon. Such compounds are often generated by combining hydrogen cyanide and alkenes, i.e., hydrocyanation: RCH=CH2 + HCN → RCH(CN)CH3. Metal catalysts are required for such reactions.

It’s possible to be exposed to cyanide by breathing air, drinking water, eating food, or touching soil that contains cyanide. Cyanide enters water, soil, or air as a result of both natural processes and industrial activities. When present in air, it’s usually in the form of gaseous hydrogen cyanide, HCN.

All cyanide compounds are highly toxic and a relatively small amount can kill a person. A 160-pound adult has a 90% chance of death after consuming only about 0.4g of potassium cyanide. A teaspoon contains about 60 times this amount!