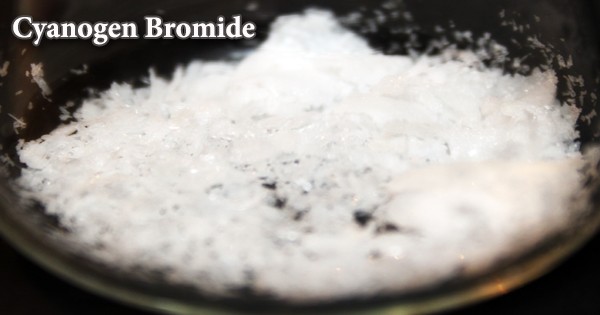 In molecular biology, cyanogen bromide is an inorganic compound used as a reagent. It has the chemical formula (CN)Br or BrCN and is a colorless or white, volatile, crystalline solid with a penetrating odor. It’s commonly used to alter biopolymers, fragment proteins, and peptides (by cutting the methionine C-terminus), and synthesize other compounds. Pseudohalogen is the classification for this substance. Cyanogen bromide hydrolyzes peptide bonds at methionine residues in peptides and proteins as a reagent for peptide mapping and amino acid sequence analysis. This reagent also serves as a coupling reagent for phosphoramidate or pyrophosphate inter-nucleotide bonds in DNA duplexes.

Bromine reacts with potassium cyanide to make cyanogen bromide, or sodium bromide, sodium cyanide, sodium chlorate, and sulfuric acid react to make cyanogen bromide. The carbon atom in cyanogen bromide has a single bond to bromine and a triple bond to nitrogen (i.e. Br–CN). Although the compound is linear and polar, it does not ionize spontaneously in water. Both water and polar organic solvents dissolve it. It decomposes slowly in water and quickly in acids, releasing hydrogen bromide, a flammable and toxic gas. Contamination with a variety of materials can cause the material to decompose quickly.

The oxidation of sodium cyanide with bromine, which occurs in two steps through the intermediate cyanogen ((CN)2), can produce cyanogen bromide:

BrCN serves as a short-term cue, causing regular “cleaning” events in the algae’s environment. The researchers discovered that allelopathic effects are dependent on H2O2 and that BrCN development is linked to haloperoxidase activity. This method of biofilm control is very successful, and it may explain the poorly understood function of volatile halocarbons from marine algae, which contribute significantly to the halocarbon budget in the atmosphere. Hydrolysis of cyanogen bromide produces hydrogen cyanide and hypobromous acid

Cyanogen bromide has a high acute toxicity. The toxic effects are close to those of hydrogen cyanide, though not as extreme. Cyanosis, nausea, dizziness, headache, lung inflammation, chest pain, and pulmonary edema are all toxic signs that can be fatal. The blood transports cyanide to all organs and tissues, where its concentration in red cells is two or three times higher than in plasma. The accumulation of cyanide in erythrocytes is thought to be a result of its binding to methemoglobin. Chronic pulmonary edema may be caused by cyanogen bromide.

Peptide bonds at the C-terminus of methionine residues are hydrolyzed by cyanogen bromide. This reaction is used to shrink polypeptide segments in preparation for detection and sequencing. It’s a poisonous drug. Its toxicity is comparable to that of HCN. It is, however, not as dangerous as HCN. Inhalation is the most toxic route since it volatilizes quickly at room temperature. Humans can experience nausea, headaches, and chronic pulmonary edema as toxic symptoms. Humans will die after being exposed to 100 ppm for 10 minutes.