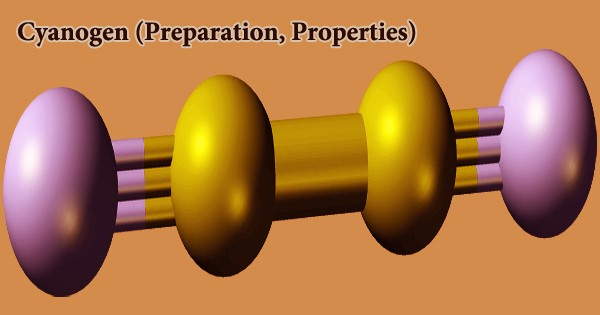 At room temperature, cyanogen is a colorless, flammable, compressed liquefied gas. It is the chemical compound with the formula (CN)2. It has a pungent, almond-like odor only at lethal levels. Boils at -20.7°C and freezes at -28°C. Shipped as a liquid with its vapor pressure confined. Since gas is heavier than air, a flame will quickly return to the source of the leak. When exposed to fire or extreme heat for an extended period of time, the containers can violently rupture and rocket. Cyanogen molecules have two CN groups, similar to diatomic halogen molecules like Cl2, but they are much less oxidizing.

The hepatic enzyme rhodanese catalyzes the irreversible reaction of cyanide and a sulfane to create thiocyanate, a relatively nontoxic compound excreted in the urine, which metabolizes the small amount of cyanide always present in human tissues at a rate of 17 ug/kg x min. While other isomers have been discovered, the two cyano groups are bound together at their carbon atoms: NCCCN. The name also refers to the CN radical, which is found in compounds like cyanogen bromide (NCBr). The slow addition of potassium cyanide solution to a solution of copper(II) salt, such as copper(II) sulfate or chloride, produces cyanogen:

Cyanogen can also be produced by combining mercuric cyanide and mercuric chloride. This method can produce dry cyanogen gas:

Cyanogen is the anhydride of oxamide:

although oxamide is manufactured from cyanogen by hydrolysis:

By heating ammonium oxalate COONH4COONH4 with phosphorus pentoxide, water is abstracted from filtered cuprous cyanide by treatment with ferric chloride solution, cyanogen is evolved with the formation of ferrous chloride, and Blast furnace gas and raw coal gas both contain trace amounts of cyanogen. It’s made by oxidizing hydrogen cyanide with chlorine over an active silicon dioxide catalyst or nitrogen dioxide over a copper salt in an industrial environment. It’s also generated when an electrical spark or discharge reacts with nitrogen and acetylene.

Paracyanogen is a cyanogen polymer. The easiest way to make it is to heat mercuric cyanide. Heating silver cyanide, silver cyanate, cyanogen iodide, or cyanuric iodide may also be used to make it. It can also be made by polymerizing cyanogen at 300 to 500oC (572 to 932oF) in the presence of trace impurities. Cyanogen is a key intermediate in the production of a variety of fertilizers, as well as a stabilizer in the production of nitrocellulose.

Cyanogen is kept cold, dry, and well-ventilated outdoors or in a separate location away from fire, acid fumes, and water. It’s delivered in metal cylinders with a high pressure. Joseph Louis Gay-Lussac was the first to synthesize cyanogen in 1815, and he named it after determining its empirical formula. Since cyanide was first isolated from the pigment “Prussian blue” by Swedish chemist Carl Wilhelm Scheele, Gay-Lussac coined the term “cyanogène” from the Greek terms v (kyanos, blue) and (gennao, I create). Within the range of 6.6–32 percent, cyanogen forms an explosive mixture with air. If liquid cyanogen is combined with liquid oxygen, it can explode. It emits poisonous fumes when combined with acid or water, or when heated to decomposition.

Cyanogen, like other cyanides, is extremely toxic because it easily converts to cyanide, which poisons the cytochrome c oxidase complex and disrupts the mitochondrial electron transfer chain. Cyanogen has a small number of uses, the most important of which is in organic synthesis. It’s also used to weld metals, as a fumigant, and in the propellants of some rockets. The eyes and respiratory system are also irritated by cyanogen gas. Depending on the level of exposure, inhalation may cause headaches, dizziness, rapid heartbeat, nausea, vomiting, loss of consciousness, convulsions, and death.

As cyanogen burns in oxygen, it creates the second-hottest known natural flame (after carbon subnitride), with a temperature of over 4,525 °C (8,177 °F). As a fumigant, a fuel gas for welding and cutting metals, a propellant, and in organic synthesis, cyanogen is used. It’s used in the gases of blast furnaces. Cassava flour eaten in northern Mozambique has also been found to contain it in varying concentrations. Cyanogen is mostly used as an intermediate in organic synthesis, but it was once used in poison gas warfare.