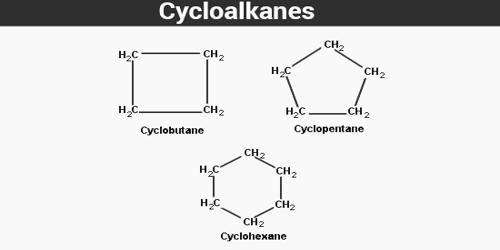 A cycloalkene is a type of alkene hydrocarbon that contains a closed ring of carbon atoms but has no aromatic character. Some cycloalkenes, such as cyclobutene and cyclopentene, can be used as monomers to produce polymer chains. They are unsaturated and therefore have fewer hydrogen atoms and fewer bonds, as opposed to open-chain alkenes, which means that there is less internal energy within the molecule. Due to geometrical considerations, smaller cycloalkenes are almost always the cis isomers, and the term cis tends to be omitted from the names. In larger rings (from around 8 atoms), cis-trans isomerism of the double bond may occur. They are cyclic hydrocarbons with at least one C=C double bond in the ring. They are saturated, meaning they have at least three alkane compounds present to form a ring or a cycle structure.

Alkenes are compounds that consist of carbons and hydrogens bonded together with a carbon-carbon double bond. Cycloalkenes are alkenes that consist of three or more carbon atoms linked together with at least one carbon-carbon double bond to form a structural ring. They are hydrocarbons containing a ring of carbon atoms and one or more double bonds in the cycle that do not form an aromatic ring. Cycloalkenes have the general formula CnH2(n-m). The letter m represents the number of double bonds. Thus, cyclopropene has the formula C3H4 while that of cyclobutene is C4H6. The ring systems with one or more double bonds are found in many natural products. They are named the same way that open-chain chained alkenes are, with the exception that the numbering is started at one of the carbons of the double bond in order to keep the index numbers as small as possible. The properties of alkanes and alkenes are very similar. Macroscopically, most cycloalkenes are liquid at room temperature, though they have very low solubility in water. Only the first few cycloalkenes are gases. Cycloalkenes are rarely solid at room temperature.

The procedure for naming cycloalkenes follows the same rules like that for linear alkenes. Carbon atoms are numbered in such a way that an olefinic double bond is always located between carbon atoms 1 and 2.