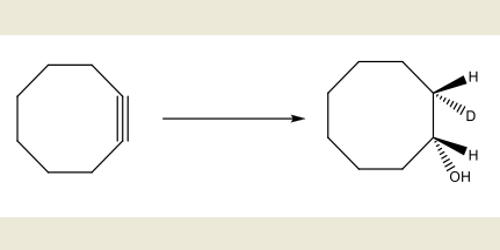 Many important hydrocarbons, known as cycloalkanes, contain rings of carbon atoms linked together by single bonds. In organic chemistry, a cycloalkyne is the cyclic analog of an alkyne. A cycloalkyne consists of a closed ring of carbon atoms containing one or more triple bonds. Double bonds can be incorporated into rings of all sizes, resulting in cycloalkenes. Cycloalkynes have a general formula CnH2n−4. In naming substituted derivatives of cycloalkenes, numbering begins at and continues through the double bond. Because of the linear nature of the C–C≡C–C alkyne unit, cycloalkynes can be highly strained and can only exist when the number of carbon atoms in the ring is great enough to provide the flexibility necessary to accommodate this geometry.

There are many hydrocarbons and hydrocarbon derivatives with two or more rings having common carbon atoms. The general formula for a Cycloalkyne that contains one carbon-carbon triple bond has to be given. Hydrocarbons are organic compounds that contain only hydrogen and carbon atoms. Hydrocarbon derivatives are the ones in which the compounds contain hydrogen and carbon atoms along with one or more additional elements. The nomenclature and physical properties of cycloalkanes cover the IUPAC systems of naming cycloalkanes. The smallest isolable cycloalkyne rings are seven-membered. Coupling 1,6-dichlorododecamethyl-hexasilane with the acetylene di-Grignard reagent gives the hexasilacyclooctyne in 46% yield. Compounds of this type usually are named by attaching the prefix bicyclo to the name of the open-chain hydrocarbon with the same total number of carbon atoms as in the rings.

Large alkyne-containing carbocycles may be virtually unstrained, while the smallest constituents of this class of molecules may experience so much strain that they have yet to be observed experimentally. The simple cycloalkanes of formula (CH2)n, make up a particularly important homologous series in which the chemical properties change in a much more dramatic way with increasing n than do those of the acyclic hydrocarbons CH3(CH2)n−1H. Cyclooctyne (C8H12) is the smallest cycloalkyne capable of being isolated and stored as a stable compound. The cycloalkanes with small rings ( n=3 – 6 ) are of special interest in exhibiting chemical properties intermediate between those of alkanes and alkenes. Despite this, smaller cycloalkynes can be produced and trapped through reactions with other organic molecules or through complexation to transition metals. The physical properties of cycloalkanes can explain each cycloalkane molecular structure and the relative size from simple propane to multiple carbon-containing cycloalkanes like cyclononane. The spectroscopic properties of cycloalkanes are considerably similar to those of alkanes.