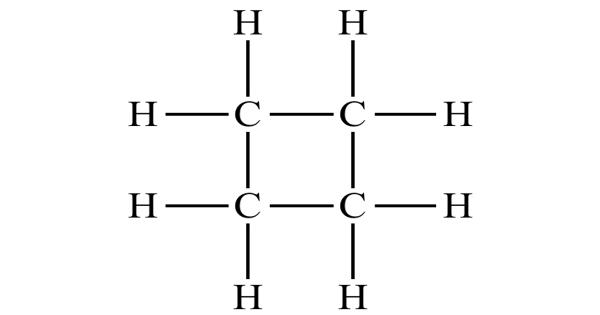 Cyclobutane is a cycloalkane and organic compound with the formula (CH2)4. It is not planar. If it were, there would be eight pairs of eclipsed hydrogen atoms, which would account for 8 × 4.2 = 33.6 kJ mole-1 of the total strain energy of cyclobutane.

Cyclobutane is a colorless gas and commercially available as a liquefied gas. Derivatives of cyclobutane are called cyclobutanes. Because cyclopropane and cyclobutane are small, rigid molecules, they possess high reactivity due to their inherent strain, because the orbitals involved in bonding are forced to deviate from the ideal sp3 tetrahedral angle of 109.5°. Cyclobutane itself is of no commercial or biological significance, but more complex derivatives are important in biology and biotechnology.

Cyclobutane is a saturated cyclic hydrocarbon C4H8 obtained synthetically as an easily condensable gas. The cyclobutane ring is found in different natural products with interesting biological properties as well as in pharmaceutical compounds. It is an alicyclic hydrocarbon, boiling point 11°C; synthesized as a condensable gas; used in organic synthesis. In addition, it is a useful molecular building block in organic synthesis due to the inherent ring strain, affording access to a variety of compounds.

The bond angles between carbon atoms are significantly strained and as such have lower bond energies than related linear or unstrained hydrocarbons, e.g. butane or cyclohexane. The cyclobutane molecule has been found by electron diffraction to have the following bond distances and bond angles: C–C, 1.568±0.02A; C–H, 1.098±0.04A; ∠HCH, 114±8°. As such, cyclobutane is unstable above about 500 °C.

The four carbon atoms in cyclobutane are not coplanar; instead the ring typically adopts a folded or “puckered” conformation. On the average the ring is nonplanar, with dihedral angle 20° (+10°, −20°), but the equilibrium symmetry may be either D24 (puckered ring) or D4h (planar ring with low rigidity leading to large amplitude of out‐of‐plane bending). One of the carbon atoms makes a 25° angle with the plane formed by the other three carbons. In this way some of the eclipsing interactions are reduced. The conformation is also known as a “butterfly”.

Many methods exist for the preparation of cyclobutanes. Cycloalkanes are saturated hydrocarbons in which the carbon atoms are joined by single covalent bonds to form a ring. Alkenes dimerize upon irradiation with UV-light. 1,4-Dihalobutanes convert to cyclobutanes upon dehalogenation with reducing metals.

Cyclobutane was first synthesized in 1907 by James Bruce and Richard Willstätter by hydrogenating cyclobutene in the presence of nickel.