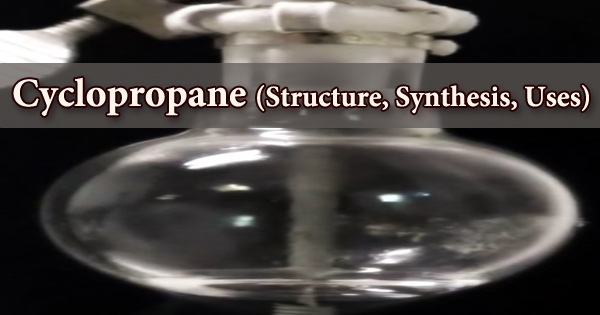 Cyclopropane, also called trimethylene, has the chemical formula (CH2)3 and is made up of three methylene groups (CH2) joined together to create a ring. It is a colorless, explosive gas that has been used in medicine as a general anesthetic since 1934. Cyclopropane is non-irritating to mucous membranes and has no effect on breathing. Its cyclical structure endows it with some of the qualities associated with unsaturated compounds, despite the fact that it is saturated. Chemically, it is relatively stable, does not isomerize or polymerize during long-term storage under normal conditions, and does not react with soda lime when heated.

Cyclopropane is delivered as a liquid with a pressure of 4-6 atms and is easily ignited. The vapors are significantly heavier than air. Frostbite can be caused by coming into contact with the liquid. It has a narcotic effect in high concentrations and can asphyxiate by displacing air (formerly used as an anesthetic gas). Containers may break violently and rocket if exposed to fire or extreme heat for an extended period of time. Cyclopropane itself is mainly of theoretical interest but many of its derivatives are of commercial or biological significance.

At 760 Torr, liquid cyclopropane has a boiling point of -33°C and a critical temperature of 125°C. The critical pressure is 54 atmospheres, but when exposed to pressures of 5 lb./sq.in. at room temperature, the gas liquefies. The induction and recovery from cyclopropane anesthesia are usually quick and painless. Inhalation of a cyclopropane-oxygen mixture containing 5 to 20% cyclopropane is used. It’s a cycloalkane with three carbon atoms arranged in a ring. It is a cycloalkane that belongs to the cyclopropanes family and serves as an inhalation anesthetic.

August Freund discovered cyclopropane in 1881 and proposed the right structure for the substance in his first article. Freund used sodium to treat 1,3-dibromopropane, resulting in an intramolecular Wurtz reaction that produced cyclopropane. The gas is 99.5 percent pure or more as provided, however, contaminants such as propylene, allene, cyclohexane, nitrogen, carbon dioxide, and bromor chloropropane are conceivable. Propylene is the most significant pollutant; quantities of up to 1% are safe, but concentrations of more than 3% are harmful.

Ralph Waters, an American anesthetist, was the first to employ cyclopropane in a clinical setting, using a closed system with carbon dioxide absorption to save money on the then-expensive gas. With a minimum alveolar concentration of 17.5 percent and a blood/gas partition coefficient of 0.55, it is a relatively strong, non-irritating, and sweet-smelling agent. G. H. W. Lucas and V. E. Henderson’s research on propylene (CH3.CH:CH2) at the University of Toronto indicated that certain samples showed severe cardiac toxicity. Lucas hypothesized that one of the contaminants in the samples, the cyclic isomer of propylene, cyclopropane, was to blame for the toxicity. When studied by Lucas and Henderson, pure samples of cyclopropane showed to be a more effective and acceptable anesthetic agent than propylene.

Cyclopropane was first looked at since it was assumed to be the poisonous component of ethylene. It operates as an NMDA receptor antagonist and is inert at GABAA and glycine receptors. It also activates specific K2P channels and inhibits the AMPA and nicotinic acetylcholine receptors. The gas’s strong lipoid and protein afiBnities result in red cells carrying 2-5 times more cyclopropane than plasma, as well as a blood/gas partition coefficient that varies with both hemoglobin concentration and plasma fat content of the blood.

Instead, it proved out to be a fantastic anesthetic, with a quick onset and recovery time and stable hemodynamics. Its use was eventually curtailed due to its great explosive potential. The 60° bond angles between carbon-carbon covalent bonds are required by the triangular structure of cyclopropane. The molecule’s molecular symmetry is D3h. Due to the eclipsed conformation of its hydrogen atoms, the molecule has a torsional strain in addition to ring strain. As a result, the carbon atom bonds are substantially weaker than in a conventional alkane, resulting in much-increased reactivity.

At room temperature, cyclopropane and cyclobutane are gases; the remaining cycloalkanes are liquids. With increasing molecular weight, their melting and boiling points gradually increase. While the C-C bonds in cyclopropane are weaker than typical, the carbon atoms are also closer together than in a regular alkane bond: 151 pm versus 153 pm (average alkene bond: 146 pm). This is an unexpected side effect of bent bonding. In the presence of a nickel catalyst, cyclopropane and cyclobutane react with hydrogen to create propane and n-butane, respectively.

Cyclopropane is a flammable, sweet-smelling gas with little or no laboratory, commercial, or industrial applications. It was first made utilizing a Wurtz coupling, which involved cyclizing 1,3-dibromopropane with sodium. The use of zinc as a dehalogenating agent and sodium iodide as a catalyst can boost the yield of this reaction.

It can be used as an anesthetic; however, because of its side effect of generating a fast drop in blood pressure and the possibility for cardiac dysrhythmia, it has been unavailable for clinical usage since the mid-1980s. The effect of several inhalation and iv anesthetics, alone or in combination, on brain electric activity during the evoked cortical response, was studied in rats. The disturbance of normal modulation exerted upon the ventrobasal thalamus by the thalamic reticular nucleus, which is extremely vulnerable to the action of various drugs, affects the evoked sensory response in a way that supports a common site of anesthetic action.

Cyclopropane is a potent, non-irritating anesthetic that can be administered in just a few breaths. It was employed as a pseudo-π unsaturated hydrocarbon prototype to investigate the rotational spectrum of its complex generated with chlorine monofluoride and its similarities to isotopomers. When sufficiently heated or ignited in the presence of air, oxygen, or other strong oxidizing agents, it burns exothermically, releasing carbon dioxide and water. Due to the large temperature differences involved, contact of the cold liquefied gas with water can result in intense or violent boiling and extremely quick evaporation. A liquid “superheat” explosion may occur if the water is heated.