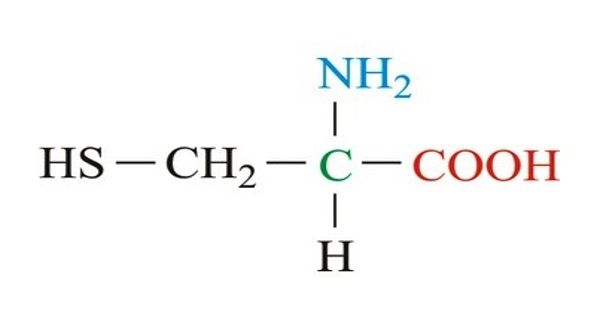 Cysteine is a nonessential amino acid (protein building block), meaning that cysteine can be made in the human body. It is an α-amino acid. It has the chemical formula HO2CCH(NH2)CH2SH. It is important for protein synthesis, detoxification, and diverse metabolic functions.

Cysteine can be synthesized by the body and is not essential to the diet. Its key chemical feature is a thiol group that contains sulfur.

Cysteine is one of the few amino acids that contains sulfur. In peptides and proteins, the sulfur atoms of two cysteine molecules are bonded to each other to make cystine, another amino acid.  This allows cysteine to bond in a special way and maintains the structure of proteins in the body. It is important in collagen production, as well as skin elasticity and texture. In proteins, it usually exists as a cystine by forming a disulfide bond between two cysteine residues, carefully protected inside of the protein in order to function as a stabilizer for the high-order structure of the protein, or an active center for its bioactivity. 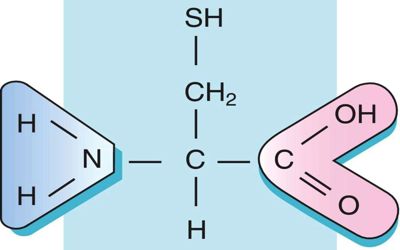 Cysteine is a semi-essential amino acid, which means that humans can make it. The codons UGU and UGC code for cysteine. It has a role as a fundamental metabolite. It is an alpha-amino acid, a polar amino acid, and a sulfur-containing amino acid. It contains a sulfanylmethyl group. The bonded sulfur atoms form a disulfide bridge, a principal factor in the shape and function of skeletal and connective tissue proteins and in the great stability of structural proteins such as keratin.

Cysteine is a component of the antioxidant glutathione. The body also uses cysteine to produce taurine, another amino acid. The thiol side chain in cysteine often does enzyme reactions as a nucleophile. The thiol oxidizes to give the disulfide derivative cystine, which is important in many protein structures. It is a component of the antioxidant glutathione and plays a role in the metabolism of essential biochemicals such as coenzyme A, heparin, and biotin. When used as a food additive, cysteine has the E number E920. It is also required in the manufacture of amino acid taurine.