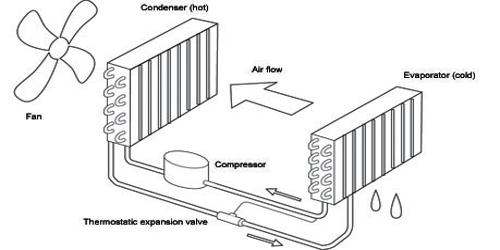 Dehumidifiers reduce humidity levels, making your home less hospitable to allergens such as dust mites, mold, and mildew. It is a device that removes excess moisture from the air. A dehumidifier is an electrical appliance that reduces and maintains the level of humidity in the air, usually for health or comfort reasons or to eliminate musty odor and to prevent the growth of mildew by extracting water from the air. It is a bit like a vacuum cleaner: it sucks in air from your room at one end, takes the moisture out of it, and then blows it back out into the room again. It can be used for household, commercial, or industrial applications.

Dehumidifiers help reduce odors that can accompany mold and mildew in your home—getting rid of that “musty” or “rotting” smell. They do so by working to cleanse the air of excess moisture and prevent mold, bacteria, and other particulates from growing, all of which could lead to a variety of health issues in the long-run. Large dehumidifiers are used in commercial buildings such as indoor ice rinks and swimming pools, as well as manufacturing plants or storage warehouses. They are effective units that come with many benefits for your space, and most importantly, yourself.

The first dehumidifier was created by American inventor Willis Carrier in 1902 to dehumidify a Brooklyn printing plant. Carrier cited the discovery as later motivating further discoveries in air conditioning.

Condensate dehumidifiers use a refrigerator to collect water known as condensate, which is normally greywater but may at times be reused for industrial purposes. Some manufacturers offer reverse osmosis filters to turn the condensate into potable water. Some designs, such as the ionic membrane dehumidifier, dispose of water as a vapor rather than liquid.

Desiccant dehumidifiers bond moisture with hydrophilic materials such as silica gel. Cheap domestic units contain single-use hydrophilic substance cartridges, gel, and powder. Larger commercial units contain hot air recovery systems in order to remove humid air from outside the room. They help reduce odors that can accompany mold and mildew in your home—getting rid of that “musty” or “rotting” smell. The quality of air in your home is not only measured in the number of toxins that you may or may not be breathing in, but also by the humidity levels of the air itself. They eliminate potentially dangerous variables that can affect your home, family, and even your beloved pets.

The energy efficiency of dehumidifiers can vary widely.