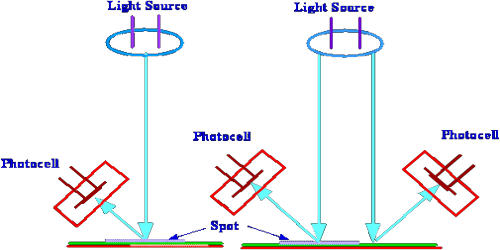 It measuring the optical density of a substance by shining light on it and measuring its transmission. Optical density is a result of the darkness of a developed picture and can be expressed absolutely as the number of dark spots (i.e., silver grains in developed films) in a given area, but usually, it is a relative value, expressed in a scale. These peaks compose the graph or electropherogram and are printed on a recorder chart or computer display. Absorbance and/or fluorescence can be measured with densitometry.

Since density is usually measured by the decrease in the amount of light that shines through a transparent film, it is also called absorptiometry, the measure of light absorption through the medium. The corresponding measuring device is called a densitometer (absorptiometer). The decadic (base-10) logarithm of the reciprocal of the transmittance is called the absorbance or density.

DMax and DMin refer to the maximum and minimum density that can be produced by the material. The difference between the two is the density range. The density range is related to the exposure range (dynamic range), which is the range of light intensity that is represented by the recording, via the Hurter–Driffield curve.

Densitometry technologies have evolved as our understanding of relevant disease processes has increased. According to the principle of operation of the densitometer, one can have:

Dual-energy X-ray absorptiometry is used in medicine to evaluate calcium bone density, which is altered in several diseases such as osteopenia and osteoporosis. In a complementary fashion, our understanding of the disease processes has increased as the technologies have evolved. DXA is the most widely used imaging device in pediatric bone health research, as it is safe for use with children and adolescents and precisely measures BMC, bone area, and BMD at clinically relevant sites such as the proximal femur and lumbar spine. Special devices have been developed and are in current use for clinical diagnosis, called bone densitometers.