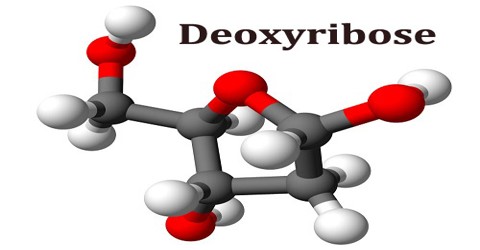 Deoxyribose is a sugar, which is found in the side chains of DNA, differing from ribose in having a hydrogen atom instead of an OH group on one of its carbon atoms. It is a monosaccharide. Monosaccharides are the building blocks for more complicated sugars. Here, ‘mono’ means ‘one,’ and ‘saccharide’ means ‘sugar.’ The chemical formula for deoxyribose is C 5 H 10 O 4. Deoxyribose and ribose are both five-carbon sugars, yet they differ from each other in one very specific way. In ribose, a hydroxyl (hydrogen-oxygen) molecule is attached to three of the carbon molecules, but in deoxyribose, one of the carbons in the deoxy ring is missing an oxygen atom and has only a hydrogen atom attached to it instead. In fact, deoxyribose is derived by removing the oxygen from the ribose molecule. This missing oxygen is the differentiating factor between these two sugars and the prefix “de” implies a negative, or that a ribose molecule is less one oxygen molecule.

It is found in the cells of all living organisms, as it is a key component of deoxyribonucleic acid (DNA). DNA is made up of two chains of nucleotides bonded together. A nucleotide is formed when a 5-carbon sugar bonds to a phosphate group and a nitrogen-containing base. Nucleotides can have either a deoxyribose or ribose sugar as the 5-carbon sugar, and depending on which sugar is used, the nucleic acid that is formed will be either DNA or ribonucleic acid (RNA).

Deoxyribose consists of five carbon atoms that form a pentagonal shape. As you can tell by its name, deoxyribose is a particular type of sugar known as a pentose monosaccharide, which contains five carbon atoms. Ribose, which is contained in the name, is also considered a pentose monosaccharide. It’s a normal sugar that has one oxygen atom attached to each carbon atom. Chemically, what separates ribose from deoxyribose is that ribose contains an additional oxygen atom. Deoxyribose is different from a ribose because it is missing one oxygen atom and does not contain the alcohol group. It is the main building block of DNA and is found in every nucleotide that makes up the long chain of genetic information. The compound is often referred to as DNA itself, because it makes up so much of the structure that is found in every cell. Deoxyribose is partially where the name for DNA, which is deoxyribonucleic acid, derives from. The absence of these parts and the missing 2′ hydroxyl group makes it possible for the DNA to take its well known double helix shape. This also makes it possible for the DNA strands to be compacted in the core of the cells. The cells being compacted in this manner makes it possible for each individual cell to carry a copy of the organisms genetic material. These copies are used in the cell division and the processes known as mitosis, meiosis, transcription and translation. Without the copies and compressed DNA strands, the body’s ability to grow, heal and replace dead cells would not be possible. Wounds that could not be healed would leave the body open for infection and for disease. It would also make an organism unable to reproduce because reproduction relies upon cell replication.

A component of DNA, 2-deoxyribose derivatives have an important role in biology. The DNA (deoxyribonucleic acid) molecule, which is the main repository of genetic information in life, consists of a long chain of deoxyribose-containing units called nucleotides, linked via phosphate groups. In the standard nucleic acid nomenclature, a DNA nucleotide consists of a deoxyribose molecule with an organic base attached to the 1′ ribose carbon. The 5′ hydroxyl of each deoxyribose unit is replaced by a phosphate (forming a nucleotide) that is attached to the 3′ carbon of the deoxyribose in the preceding unit.

The absence of the 2′ hydroxyl group in deoxyribose is apparently responsible for the increased mechanical flexibility of DNA compared to RNA, which allows it to assume the double-helix conformation, and also to be compactly coiled within the small cell nucleus. The double-stranded DNA molecules are also typically much longer than RNA molecules. The backbone of RNA and DNA are structurally similar, but RNA is single stranded, and made from ribose as opposed to deoxyribose.

Other biologically important derivatives of deoxyribose include mono-, di-, and triphosphates, as well as 3′-5′ cyclic monophosphates.