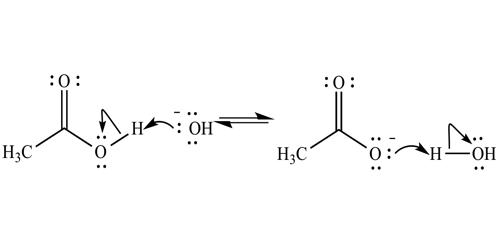 Deprotonation means removing the most acidic proton of the compound by a base that you need to choose. It is the removal (transfer) of a proton (or hydron, or hydrogen cation), (H+) from a Brønsted–Lowry acid in an acid-base reaction. Deprotonation of ethynyl derivatives, generally to form the magnesium derivative, permits efficient condensation with aldehydes and ketones, for example, to yield the hydroxyalkyl compounds. The species formed is the conjugate base of that acid. The complementary process, when a proton is added (transferred) to a Brønsted–Lowry base, its protonation. The species formed is the conjugate acid of that base.

Deprotonation is the removal of a proton (hydrogen ion) from a molecule to form a conjugate base. A species that can either accept or donate a proton is referred to as amphiprotic. An example is the H2O (water) molecule, which can gain a proton to form the hydronium ion, H3O+, or lose a proton, leaving the hydroxide ion, OH−.  Sodium hydroxide can be used to fully deprotonate a phenol. Water-soluble alcohols do not change the pH of the solution and are considered neutral.

The relative ability of a molecule to give up a proton is measured by its pKa value. One of the key skills in acid-base chemistry is the understanding of the pKa table and being able to use it to predict the outcome of an acid-base reaction. A low pKa value indicates that the compound is acidic and will easily give up its proton to a base. The pKa of a compound is determined by many aspects, but the most significant is the stability of the conjugate base.

The principle that you need to rely on to find a proper base is that any acid-base reaction lies to the side of forming a weaker acid and a base. This is primarily determined by the ability of the conjugated base to stabilize a negative charge. Remember, strong acid and a base react to form a weak acid and a base. One of the most important ways of assessing a conjugate base’s ability to distribute negative charge is using resonance. And because the acid strength is quantified by the pKa value, we need to identify the pKa of the acid and the conjugate acid (on the right side) of the reaction to determine which side the equilibrium will shift. Electron withdrawing groups or electron-donating groups present on a molecule also determine its pKa. The solvent used can also assist in the stabilization of the negative charge on a conjugated base.