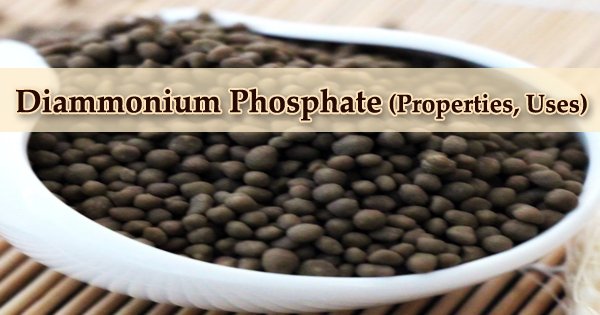 Diammonium phosphate (DAP), also known as diammonium hydrogen phosphate, is an inorganic phosphate that is the diammonium salt of phosphoric acid with the chemical formula (NH4)2HPO4. It appears as a colorless monoclinic crystal or white powder that is soluble in water but not in alcohol, acetone, or ammonia. The dissociation pressure of ammonia in solid diammonium phosphate is given by the following expression and equation:

To dissolve in 40 ml of water with 0.1mol/L sulfuric acid titration to a pH of 4.6, weigh roughly 600 g accurately. 13.21 mg diammonium hydrogen phosphate (NH4) 2HPO4 is produced for every mL of 0.1 mol/L sulfuric acid. According to the diammonium phosphate MSDS from CF Industries, Inc., decomposition starts as low as 70 °C: “Hazardous Decomposition Products: When exposed to air at normal temperature, it gradually loses ammonia. At roughly 70 °C (158 °F), it decomposes to ammonia and monoammonium phosphate. DAP emits phosphorus oxides, nitrogen oxides, and ammonia at 155 °C (311 °F).”

When heated to breakdown, hazardous phosphorus oxides, nitrogen oxides, and ammonia fumes are released. The alkaline pH (7.5–8) that develops surrounding the dissolving granule is a prominent feature of DAP. Volatile ammonia can be detrimental to seedlings and plant roots in close proximity as ammonium is released from dissolving DAP grains. At room temperature, it is unstable and has an ammonium vapor pressure both in solid state and in solution.

The chemical is found in nature as phosphammite, a very rare mineral. Biphosphammite is a mineral that contains a similar dihydrogen compound. Both have something to do with guano deposits. The main technique of industrial manufacturing for diammonium phosphate is the reaction of hot phosphoric acid with liquid ammonia or the extraction of phosphoric acid and liquid ammonia. The former has a high purity level and a straightforward technique. The latter employs a low-cost wet extraction of phosphoric acid.

DAP is a type of fertilizer. When used as plant food, it briefly raises the pH of the soil, but over time, due to nitrification of the ammonium, the treated soil becomes more acidic than before. The ammonia gas is fed through the round tube ammonium distributor for neutralization under stirring conditions. After being neutralized until the reaction liquid’s Ph is between 8 and 9, the reaction liquid is filtered while still hot, and then transferred to the cooling crystallizer. The mother fluid is separated by centrifugation and then dried to get diammonium phosphate products after cooling and crystallization.

The ammonium in DAP is a good source of nitrogen, and it will be progressively transformed to nitrate by soil microorganisms, resulting in a pH reduction. Phosphoric acid extraction and liquid ammonia neutralization method: a little amount of hydrogen peroxide is added to the phosphoric acid solution to oxidize the ferrous iron. Fill the tubular reactor with phosphoric acid, which will be neutralized with ammonia in the second reaction, resulting in a pH of roughly 8.0.

After passing through the frame filter, the filtrate is directed to the fine-tuning tank to adjust the pH to 7.888, then to the evaporator to attain a relative density of 1.3 before being returned to the cooling mold. Because the ammonium ion in DAP is more prone to change to ammonia in a high-pH environment, it is incompatible with alkaline substances. To obtain feed-purpose diammonium phosphate from wet phosphate as a raw material, the production process necessitates two-step defluorination, three-step amination, and thermal decomposition with triammonium phosphate.

It has a lower production cost than the approach that uses yellow phosphorus as a raw material. DAP has the ability to act as a fire retardant. It lowers the material’s combustion temperature, reduces maximum weight loss rates, and causes more residue or char to be produced. It can be utilized as a food leavening agent, dough regulator, yeast food, brewing fermentation additives, and a buffer in the food sector. It can be added to ruminant feed as a supplement. It has use in printing plates, medicine, firefighting, and electronic tubes.

DAP is the most common component in commercial firefighting equipment. It’s also used to make printing plates, tubes, ceramics, and china, as well as for wastewater biochemical treatment. It’s also employed by the military as a flame retardant in rocket engine motor insulating materials. DAP is also used as a yeast nutrient in winemaking and mead making; as a nicotine enhancer in some brands of cigarettes; to prevent afterglow in matches; as a flux for soldering tin, copper, zinc, and brass; and to control the precipitation of alkali-soluble and acid-insoluble colloidal colors on wool.