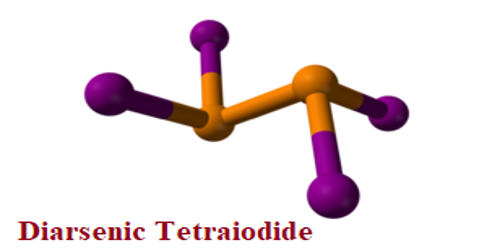 Diarsenic tetraiodide is an inorganic compound of arsenic and iodine. It is a dark red metastable solid. The compound is closely related to the better-characterized diphosphorus tetraiodide. It is the only stable low valent halide formed by arsenic at ambient temperatures; at higher temperatures, it decomposes to AsI3 and elemental arsenic. At 230°C partial decomposition takes place giving arsenic(III) iodide and arsenic-containing iodine.

Diarsenic tetraiodide is extremely sensitive to oxidation and reacts with water immediately eliminating arsenic. Identified in the late 19th century with the correct empirical formula, the compound was assigned the formula (As2I4) several years later. 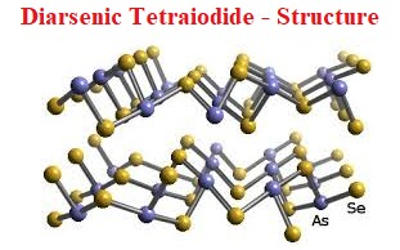 Diarsenic tetraiodide reacts with iodine to produce arsenic(III) iodide. The reaction takes place in a boiling solution in the liquid CS2. It has been used as a reducing agent in organic chemistry. It is a rare example of a compound with phosphorus in the +2 oxidation state and can be classified as a subhalide of phosphorus. It is the most stable of the diphosphorus tetrahalides. It is used for deprotecting acetals and ketals to aldehydes and ketones, and for converting epoxides into alkenes and aldoximes into nitriles.

Epoxides are converted regioselectively to the more substituted alcohols under safe reaction conditions at room temperature by using catalytic amount of diphosphorus tetraiodide (P2I4) as a reducing agent in combination with tetraethylammonium bromide.