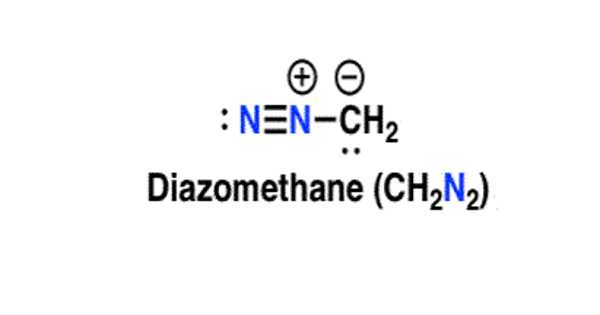 Diazomethane is a highly valuable and versatile organic chemistry building block. It is the chemical compound CH2N2, which was discovered in 1894 by German chemist Hans von Pechmann. It is the most basic diazo compound. It is an extremely sensitive explosive yellow gas in its pure form at room temperature; thus, it is almost universally used as a solution in diethyl ether. It is an effective methylation agent for carboxylic acids, phenols, some alcohols, and a wide range of other nucleophiles, including nitrogen and sulfur heteroatoms.

The compound is a common methylating agent in the laboratory, but it is too dangerous to use on a large scale without special precautions. The introduction of the safer and equivalent reagent trimethylsilyldiazomethane has significantly reduced the use of diazomethane.

Diazomethane is the simplest diazo compound, in which a diazo group is attached to a methylene group. It has a role as an alkylating agent, an antineoplastic agent, a carcinogenic agent, and a poison.

Diazomethane is always prepared and used as a solution in ether for safety and convenience. Carboxylic acids are converted to methyl esters, and phenols are converted to methyl ethers. Proton transfer from carboxylic acid to diazomethane is thought to produce methyl diazonium cation, which reacts with the carboxylate ion to produce the methyl ester and nitrogen gas.

Diazomethane is synthesized by hydrolyzing an ethereal solution of N-methyl nitrosamide with an aqueous base. N-nitroso-N-methylurea is the traditional precursor, but it is somewhat unstable, so compounds like N-methyl-N’-nitro-N-nitrosoguanidine (MNNG) and N-methyl-N-nitroso-p-toluenesulfonamide (Diazald) are now preferred.

The deuterated derivative CD2N2 is formed when CH2N2 reacts with basic D2O solutions.

Diazomethane is toxic when inhaled or comes into contact with the skin or eyes (TLV 0.2 ppm). It’s a yellowish, explosive, and highly toxic gas with a melting point of -1450C and a boiling point of -230C. It has the potential to be explosive in its pure and undiluted forms, but it has also been known to detonate unexpectedly in its diluted form.

Chest pain, headache, weakness, and, in severe cases, collapse are all symptoms. The onset of symptoms may be delayed. There have been reports of diazomethane poisoning deaths. Diazomethane is an irritant and highly toxic by inhalation or contact with skin or eyes, in addition to being explosive.