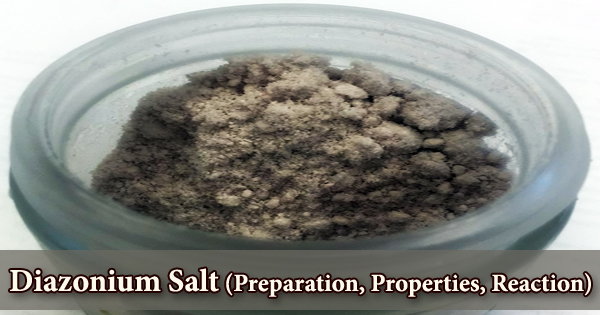 Diazonium compounds, also known as diazonium salts, are organic compounds with the chemical structure R – +N ≡ N, where R is an atomic grouping created when a hydrogen atom is removed from an organic molecule. The diazonium group (N2+) is one of the most powerfully electron-withdrawing substituents, according to tabular linear free energy relationship constants (e.g. Hammett m and p). A diazonium salt is an organic molecule with a nitrogen-nitrogen triple bond and a generic side group, which might be alkyl (an alkane derivative) or aryl (benzene ring).

The name’salt’ originates from the fact that the diazo (‘di-nitrogen’) component of the molecule exists as an ionic salt, with a chloride ion serving as a typical counter-ion for the positively charged nitrogen atom. Organic compounds having the generic formula RN2+X–, where X is an organic or inorganic anion (for example, Cl–, Br–, BF4–, and so on) and R is an alkyl or aryl group. In comparison to their unsubstituted counterparts, the positions of alkanediazonium species and acidic protons on diazonio-substituted phenols and benzoic acids have substantially decreased pKa values.

Diazonium salts are made by reacting primary amines with nitrous acid (diazotization); their most notable characteristic is their instability. Diazonium salts’ chemistry is governed by their proclivity to dediazotize via the thermodynamically (enthalpically and entropically) advantageous ejection of dinitrogen gas. The aliphatic diazonium salts exist only as transitory intermediates, swiftly dissolving into a nitrogen molecule and a carbonium ion; some aromatic diazonium salts are stable enough to be separated, but readily react with nitrogen loss or the creation of azo compounds.

Diazonium salts were initially synthesized from aromatic amines in 1858, and the dye industry quickly realized their value in the production of azo compounds. The technique of creating diazonium salts is quite straightforward. The work can be completed by reacting an alkyl or aryl primary amine with sodium nitrite in the presence of hydrochloric acid. Most of the time, the reaction conditions are light, and it may be carried out at room temperature or even lower if necessary.

Alkanediazonium species produced by diazotization of amines have been investigated in physical organic chemistry research, and methyldiazonium carboxylate is thought to be a transitory intermediate in the methylation of carboxylic acids by diazomethane. Colors across the visible spectrum are given to dyes suitable to several types of fibers by changing the chemical structures of the amines that are diazotized (the diazo components) and the compounds with which they react (the coupling components).

The diazonium group has been shown to be very unstable under normal circumstances, thus it is seldom kept and is usually utilized immediately after synthesis. The reaction of nitrous acid with aromatic amines is one of the most popular ways to make diazonium salt. Benzene diazonium chloride is formed when aniline (aromatic amine) reacts with nitrous acid to create a diazonium salt. Arenediazonium salts, on the other hand, are more stable, though still dangerously explosive under certain conditions, because SN2 is geometrically impossible and does not occur, while SN1 occurs with much greater difficulty compared to alkanediazonium species due to difficulty in forming the high energy aryl cation and a stronger C(sp2)–N bond than in alkanediazonium compounds.

Once produced, diazonium salts can be used as building blocks in a variety of chemical processes. The most frequent way to make diazonium salts is to react aromatic amines with nitrous acid and another acid. Sodium nitrite and excess mineral acid (usually aqueous HCl, H2SO4, p-H3CC6H4SO3H, or HBF4) are commonly used to make nitrous acid in situ (in the same flask):

The diazonium group may be replaced by a number of atoms or groups of atoms, typically with the help of copper or a copper salt; these reactions allow a wide range of aromatic derivatives to be made. The Sandmeyer reaction, named after its discoverer Traugott Sandmeyer in the late 1800s, involves taking aromatic diazonium salts and reacting them with copper (I) chloride to create an aryl chloride. The diazo group on the aromatic ring is eventually replaced by a chlorine atom provided by the copper (I) chloride reagent, and the diazonium salt loses a molecule of nitrogen.

Because nitrous acid is a highly hazardous gas, it is usually made in situ (during the process) by combining NaNO2 with a mineral acid. Temperature is another key factor that influences product formation during the manufacture of these salts; most diazonium salts are stable below 5oC. Although it is preferable for the diazonium salt to remain in solution, they do have a tendency to supersaturate. An abrupt crystallization of the salt followed by its detonation has wounded or killed operators.

The diazonium group has a wide range of applications. This mix of organic and inorganic components has been a godsend for scientists in a variety of fields, from dyes and pigments to the production of different organic molecules. The azo coupling reaction is the most common diazonium salt reaction. The diazonium molecule is attacked by, or linked to, electron-rich substrates in this process. The process is called electrophilic aromatic substitution when the coupling partners are arenes like anilines and phenols:

Hydrazine derivatives are formed via the chemical reduction of aromatic diazonium ions. For the preparation of aryl iodides and fluorides, direct halogenation is not an option. It is impossible to substitute a cyano group for the nucleophilic substitution of chlorine in chlorobenzene. Diazonium salts, on the other hand, may readily be used to make cyanobenzene. When a diazonium salt is heated in water, the diazo part is replaced by a hydroxyl group (-OH), resulting in phenol.