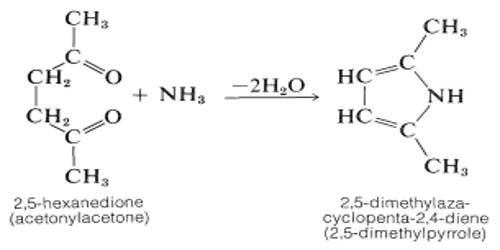 α-Dicarbonyl compounds condense with thioglycolic acid esters in the presence of sodium alkoxide to give thiophene-2,5-dicarboxylic acid derivatives. α-Dicarbonyl compounds (α-DCs), which act as precursors for advanced glycation end products in foods and in vivo, are toxic compounds formed from carbohydrates via caramelization and the Maillard reactions during thermal processing of foods. The highest concentration of total α-DCs was found in the fructose-threonine model system and the lowest concentration in the lactose-cysteine model system. The Maillard reaction is the most basic chemical reaction occurring in many foods, in the form of a non-enzymatic browning reaction between reducing sugar and amino acid.

In the keto-enol equilibrium of β-dicarbonyl compounds, the (mono)enolic form usually exceeds the keto form. 2,4-Pentadione, for instance, consists of about 76 percent enolic form. These compounds can have symmetrical or unsymmetrical substituents on each carbonyl, and may also be functionally symmetrical (dialdehydes, diketones, diesters, etc.) or unsymmetrical (keto-esters, keto-acids, etc.).