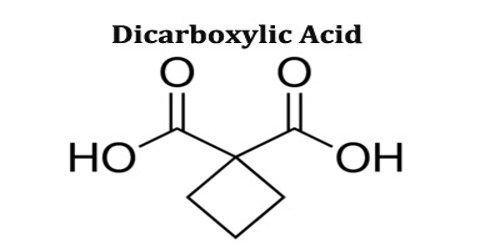 Dicarboxylic Acid is a multidisciplinary field of research and draws on environmental chemistry, physics, meteorology, computer modeling, oceanography, geology and volcanology and other disciplines. It also deals with chemical compounds in the atmosphere, their distribution, origin, chemical transformation into other compounds and finally their removal from the atmospheric domain. Solubility in water and melting point of the α,ω- compounds progress in a series as the carbon chains become longer with alternating between odd and even numbers of carbon atoms, so that for even numbers of carbon atoms the melting point is higher than for the next in the series with an odd number. These compounds are weak dibasic acids with pKa tending towards values of ca. 4.5 and 5.5 as the separation between the two carboxylate groups increases. Thus, in aqueous solution at pH about 7, typical of biological systems, the Henderson–Hasselbalch equation indicates they exist predominantly as dicarboxylate anions.

The composition and chemistry of the atmosphere is of importance for several reasons, but primarily because of the interactions between the atmosphere and living organisms. The composition of the Earth’s atmosphere has been changed by human activity and some of these changes are harmful to human health, crops and ecosystems.

Dicarboxylic acids containing vicinal dimethyl branching near the centre of the carbon chain have been discovered in the genus Butyrivibrio, bacteria which participate in the digestion of cellulose in the rumen. Adipic Acid, despite its name, is not a normal constituent of natural lipids but is a product of oxidative rancidity. It was first obtained by oxidation of castor oil (ricinoleic acid) with nitric acid. It has several other industrial uses in the production of adhesives, plasticizers, gelatinizing agents, hydraulic fluids, lubricants, emollients, polyurethane foams, leather tanning, and urethane and also as an acidulant in foods.

Pimelic Acid was also first isolated from oxidized oil. Derivatives of pimelic acid are involved in the biosynthesis of lysine.

Suberic Acid was first produced by nitric acid oxidation of cork. This acid is also produced when castor oil is oxidised. Suberic acid is used in the manufacture of alkyd resins and in the synthesis of polyamides.

Sebacic Acid, named from sebum. Sebacic acid and its derivatives have a variety of industrial uses as plasticizers, lubricants, diffusion pump oils, cosmetics, candles, etc. It is also used in the synthesis of polyamide, as nylon, and of alkyd resins.

Dodecanedioic Acid is used in the production of nylon, polyamides, coatings, adhesives, greases, polyesters, dyestuffs, detergents, flame retardants, and fragrances. It is now produced by fermentation of long-chain alkanes with a specific strain of Candida tropicalis. Azelaic acid’s name stems from the action of nitric acid oxidation of oleic acid or elaidic acid. It was detected among products of rancid fats. It is used, as simple esters or branched-chain esters in the manufacture of plasticizers, lubricants and greases.