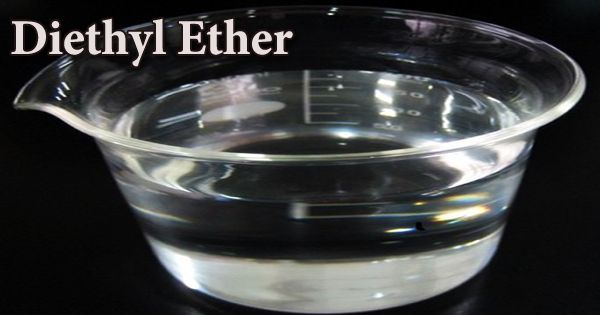 Diethyl ether, or simply ether, is a colorless, translucent substance with a numbing odor. Less dense than water and slightly soluble in water, with a flashpoint of -49°F. It’s an ether-class organic compound with the formula (C2H5)2O, often abbreviated as Et2O. As a result, it floats on the water since vapors are heavier than air. It’s widely used in laboratories as a solvent and as a starting fluid in some engines. It was once used as a general anesthetic before non-flammable drugs like halothane were created. It has been used to induce intoxication as a recreational drug. It’s a butanol structural isomer.

Ether is an organic compound that consists of two carbon atoms joined by an oxygen atom (C-O-C). Alcohol condensation can result in the formation of an ether. Diethyl-ether, a colorless, volatile, highly flammable liquid used in industry and biomedical research, and historically significant as an anesthetic agent, is often referred to as ether. Valerius Cordus, a German physician and botanist, is credited with discovering ether in 1515-1554. It is an anesthetic and useful organic solvent that can be produced using Williamson’s synthesis.

An ether in which the oxygen atom is bound to two ethyl groups is known as diethyl ether. It acts as an anesthetic for inhalation, a non-polar solvent, and a refrigerant. It’s an ether and a volatile organic compound. At room temperature, it is inactive, but some reactions may occur. Ether peroxide is formed when peroxides are exposed to oxygen (or light) for an extended period of time (also known as ether hydroperoxide). Peroxide ether is a thick, viscous liquid that takes a long time to evaporate. Antioxidants are sometimes applied to ether storage to prevent slow oxidation.

Peroxide formation can occur in opened ether containers that have been stored for more than six months. Friction, damage, or heat may all cause peroxides to explode. If diethyl ether is oxidized violently, it can crack. It can degrade into aldehydes or acids in the presence of catalysts. It reacts with an organic acid anhydride in the presence of a catalyst to form an ester, or it reacts with an inorganic acid anhydride in the absence of a catalyst to form an ester.

Acid ether synthesis can be used to make diethyl ether in laboratories and on a large scale. Ethanol is combined with a powerful acid, typically sulfuric acid (H2SO4). In the presence of water, the acid dissociates, releasing hydronium ions, H3O+. A hydrogen ion protonates the ethanol molecule’s electronegative oxygen atom, giving it a positive charge:

Diethyl ether can react with metal halides to form addition compounds like 2(C2H5)2O•BeCl2, a cerium chloride adduct. It can generate monohalogenated ethers and polyhaloethers by reacting with halogen. When ether reacts with sulfuric acid, an adduct is formed. Water, a hydrogen ion, and diethyl ether are generated when a nucleophilic oxygen atom of unprotonated ethanol displaces a water molecule from a protonated (electrophilic) ethanol molecule.

The arm-to-lung blood circulation time can be measured with diethyl ether. The medication liquid enters the right atrium, passes through the right ventricle to reach the lungs, and then exits the respiratory tract after being injected into the upper arm vein. Ethanol dehydrates to form ethylene at higher temperatures. Since the reaction to create diethyl ether is reversible, the reactants and products eventually reach equilibrium.

Ethyl ether is used to dissolve fats, oils, waxes, gums, perfumes, and nitrocellulose, as well as to make gun powder, anesthetics, and organic synthesis. Diethyl ether has a high cetane number of 85–96 and is used as a starting fluid for gasoline and diesel engines in conjunction with petroleum distillates due to its high volatility and low flash point. Inhaling Diethyl Ether can irritate the nose and throat. Drowsiness, arousal, dizziness, vomiting, irregular breathing, and saliva are all symptoms of breathing Diethyl Ether. High levels of exposure can cause unconsciousness or even death.

In the manufacture of pharmaceuticals and cosmetics, it is used as a solvent to extract plant and animal compounds. Chemical synthesis consumes another 25% of total ether output. It is an intermediate used in the production of monoethanolamine (MEA, C2H7NO). Grignard reagents are manufactured using ether. The general shape of a Grignard reagent is RMgX, where R is an alkyl or aryl group and X is a halogen. In industrial organic synthesis, Grignard reagents are commonly used. It’s also used in carbureted compression ignition model engines as part of the fuel mixture. Diethyl ether is very similar to one of its precursors, ethanol, in this way.

Diethyl ether is absorbed instantly from inhaled air into the bloodstream, where it quickly enters the brain. Because of ether’s more desirable therapeutic index, or the difference between an appropriate dose and a potentially dangerous dose, it largely replaced chloroform as a general anesthetic. Ethyl ether is a solvent that can irritate the skin. Despite the fact that it is a non-comedogenic raw material, it is still rarely used in cosmetics.

There is no evidence that diethyl ether is carcinogenic, and no reproductive effects have been identified. Loss of appetite, fatigue, drowsiness, dizziness, and other central nervous system symptoms can occur after prolonged exposure to diethyl ether vapor. Ether drinking was common among Polish peasants in the 19th and early 20th centuries. It is a long-established and still widely used recreational drug by Lemkos. It’s normally served in a shot glass with milk, sugar water, or orange juice in a small amount (kropka, or “dot”). It has been known to induce psychological dependency, also known as etheromania, when used as a medication.

Diethyl ether is highly flammable and can create explosive air/vapor mixtures. When dry, ether peroxides have a higher boiling point than ether and are contact explosives. Diethyl ether has an autoignition temperature of 160 °C (320 °F). When ether must be heated or distilled, it is normal practice in chemical labs to use steam (thereby limiting the temperature to 100 °C (212 °F)). Diethyl ether is commonly supplied with additives that prevent peroxide formation; however, distillation eliminates these inhibitors, making the liquid more susceptible to peroxide formation. Peroxide-containing materials should be processed to remove the peroxides before use or properly disposed of.