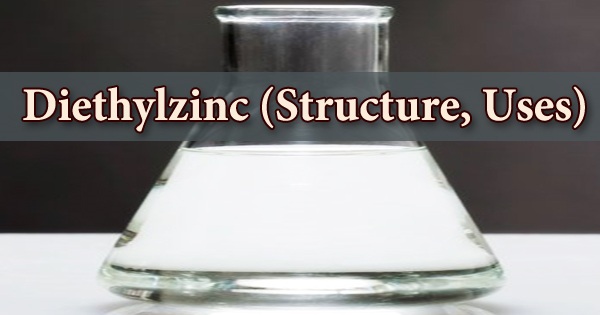 Diethylzinc (C2H5)2Zn, or DEZ, is a pyrophoric liquid with a garlic-like odor. When transported in sealed tubes with carbon dioxide, it remains stable. It’s an organozinc compound with a zinc core bonded to two ethyl groups that are highly pyrophoric and reactive. In organic chemistry, this colorless liquid is a crucial reagent. It has the potential to disintegrate violently in water and burn spontaneously when exposed to air. It is poisonous if eaten. Containers of this substance may explode if exposed to heat or flame. It’s a type of aircraft fuel. It’s sold as a solution in hexanes, heptane, or toluene, as well as a pure liquid.

When diethylzinc is transported in sealed tubes containing carbon dioxide, it is stable. It has the potential to disintegrate violently in water and burn spontaneously when exposed to air. The first organozinc compound was discovered by Edward Frankland (a British chemist) in 1848 from zinc and ethyl iodide. By employing diethyl mercury as a starting ingredient, he was able to improve the synthesis. The reaction of a 1:1 combination of ethyl iodide and ethyl bromide with a zinc-copper couple, a source of reactive zinc, is the modern synthesis.

Alcohols (methanol, ethanol), bromine, chlorine, and liquid sulfur dioxide all react explosively with diethylzinc. Water, nitro compounds, arsenic trichloride, and phosphorus trichloride all react violently. The compound crystallizes in a space group symmetry I41md tetragonal body-centered unit cell. Diethylzinc has almost linear Zn centers in the solid-state. The Zn-C bonds are 194.8(5) pm in length, whereas the C-Zn-C angle is 176.2(4)°. The Zn-C distance (195.0(2) pm) in the gas phase is extremely comparable to that in the solid-state.

Excessive or continuous inhalation of fumes from ignition or decomposition can produce “metal fume fever”; symptoms normally last 12-24 hours, with complete recovery in 24-48 hours. Contact with liquid, vapor, or dilute solution irritates the eyes rapidly and badly; without adequate irrigation, the cornea may be permanently injured. Thermal and acid burns are caused by moisture in the skin combining with chemicals; without immediate treatment, tissue may be scarred. Ingestion is improbable, although it could result in rapid burns at the point of contact, as well as discomfort, nausea, vomiting, cramps, and diarrhea; if left untreated, tissue could become ulcerated.

Diethylzinc is an essential chemical reagent despite its severe pyrophoric tendency. It is employed as a source of the ethyl carbanion in addition to reactions to carbonyl groups in chemical synthesis. It’s utilized in organic synthesis, and it’s also used to keep archival documents safe. It’s also widely employed as a zinc source in nanoparticle synthesis in materials science chemistry. Containers of this substance may explode if exposed to heat or flame. Diethylzinc’s applications are not restricted to chemistry.

It was employed in tiny quantities as a hypergolic or “self-igniting” liquid rocket fuel because of its strong reactivity toward air. It ignites on contact with an oxidizer; therefore, the rocket motor just needs a pump and no spark source for ignition. Halogens, halogenated hydrocarbons, nitro organics, oxidizers, sulfur dioxide, and phosphorus, arsenic, and antimony chlorides can all cause violent reactions. Diethylzinc creates pyrophoric triethyl phosphine, triethyl arsine, and triethyl stibine from the latter chemicals. Water should not be allowed to enter containers or come into contact with the substance. Cool containers by soaking them with water until the fire is completely out. In the event of a rising sound from the venting safety devices or a darkening of the tank, remove it immediately.

In theory, acid residues in the paper would be neutralized by diethylzinc vapor, leaving mildly alkaline zinc oxide residues. Despite encouraging early results, the project was shelved. Diethylzinc’s pyrophoricity can be used to check the inert atmosphere within a glovebox. When a bottle of diethylzinc is opened, even a few parts per million of oxygen causes it to fume. Water should not be used on the material itself. Keep sparks, flames, and other ignition sources at a distance. Keep trash out of drains and water sources. Maintain the material’s dryness. Using excessive amounts of water or soap and water, wash away any item that may have come into touch with the body.