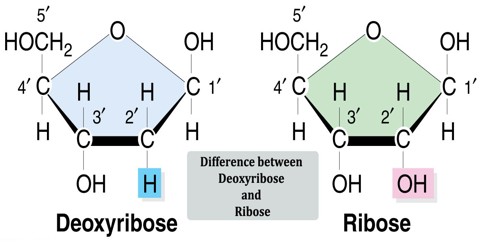 Difference between Deoxyribose and Ribose

Difference between Deoxyribose and Ribose

Deoxyribose is an aldopentose, which means a pentose sugar with an aldehyde functional group in position. An aldehyde group consists of a carbon atom that is bonded to a hydrogen atom and double-bonded to an oxygen atom (chemical formula O=CH-). Deoxyribose is derived from ribose. Ribose forms a five-member ring composed of four carbon atoms and one oxygen atom. Hydroxyl (-OH) groups are attached to three of the carbons. The fourth carbon in the ring, one of the carbon atoms adjacent to the oxygen, which is attached to the fifth carbon atom and a hydroxyl group. Deoxyribose is formed by the replacement of the hydroxyl group at the position, the carbon furthest from the attached carbon with hydrogen, leading to the net loss of an oxygen atom. Ribose has the chemical formula C5H10O5. Thus, deoxyribose has the chemical formula C5H10O4.

Deoxyribose and Ribose are both forms of simple sugars or monosaccharides that are found in the living organisms. They are of great importance biologically as they help to form the blueprint of the organism which is then passed on through generations. Any change in the blueprint in one generation of the species is manifested in the next in the form of physical or evolutionary changes. But ribose and deoxyribose have some subtle yet vital differences. Deoxyribose is also a form of pentose sugar but with one oxygen atom less. The chemical formula of deoxyribose sugar is C5H10O4. It is also an aldopentose sugar as it has an aldehyde group attached to it. The modification helps the enzymes present in the living body to differentiate between ribonucleic acid and deoxyribonucleic acid. The shape of deoxyribose sugar is such that four out of five carbon atoms along with an atom of oxygen form a five membered ring. The remaining carbon atom is attached to two hydrogen atoms and lies outside the ring. The hydroxyl groups on the third and fifth carbon atom are free to attach to phosphate atoms. As a result only two phosphate atoms can attach to deoxyribose sugar. Deoxyribose plus a protein base which can be either purine or pyramidine forms deoxyribonucleoside. When phosphate atoms attach to deoxyribonucleoside it forms deoxyribonucleic acid or the DNA. DNA is the store house of genetic information in all living organisms. Every organism has a different DNA which is responsible for the characteristic features of that species or organism. Changes in the DNA molecule brings about a change in the genetic make- up of the organism. DNA is a double helical structure composed of nucleotides attached in a spiral shape. Nucleotide is composed of a nitrogenous base, pentose sugar and phosphate. The arrangement of the nitrogenous base forms the genetic code for that organism. This is a pentose sugar which has five carbon atoms and ten hydrogen atoms. Its molecular formula is C5H10O5.  This is also known as aldopentose as it has an aldehyde group attached at the end of the chain in the open form. The ribose sugar is a regular monosaccharide in which one oxygen atom is attached to each carbon atom in the chain. On the second carbon atom, instead of hydrogen, hydroxyl group is attached. The hydroxyl groups on the second, third and fifth carbon atoms are free so that three phosphate atoms can attach there. The ribonucleoside formed by the combination of ribose sugar and a nitrogenous base becomes ribonucleotide, when a phosphate atom gets attached to it. The base can be either purine or pyramidine which are actually types of amino acids. Amino acids are building blocks for proteins. The ribonucleotide or ribonucleic acid (RNA) has three chiral centres and eight stereoisomers. The ribose sugar is found in the RNA of living organisms. The RNA is a single stranded molecule that winds around itself. RNA or ribonucleic acid is the molecule responsible for coding and decoding genetic information. In simple language it helps to copy and express the blue print of the organism and also helps in the transfer of genetic information to the progeny. They also help in protein synthesis. Why Deoxyribose for DNA and Ribose for RNA?

DNA (Deoxyribonucleic acid) is the core of life in Earth; every known living organism is using DNA as their genetic backbone. DNA is so precious and vital to eukaryotes that its kept packaged in cell nucleus, its being copied but never removed because it never leaves the safety of nucleus. DNA directs all cell activity by delegating it to RNA. RNA (Ribonucleic acid) have varied sort of biological roles in coding, decoding, regulation, and expression of genes. RNA carries messages out of the cell nucleus to cytoplasm.

DNA and RNA use a ribose sugar as a main element of their chemical structures, ribose sugar used in DNA is deoxyribose, and While RNA uses unmodified ribose sugar.