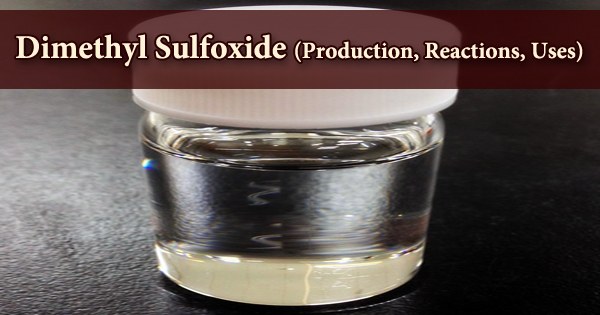 Dimethyl sulfoxide (DMSO) is a strongly polar organic liquid that is commonly used as a chemical solvent and a free radical scavenger. It has the formula (CH3)2SO and is an organosulfur compound. This colorless liquid is a polar aprotic solvent that dissolves polar and nonpolar compounds and is miscible in a variety of organic solvents as well as water. At room temperature, it appears as a colorless, odorless, hygroscopic, and flammable transparent liquid. It has a high boiling point as well as a high polarity. It has aprotic and water-miscible properties as well. It is non-miscible with paraffin, has low toxicity, and has high thermal stability.

The boiling point of DMSO is relatively high, and it has the peculiar property of leaving a garlic-like taste in the mouth after contact with the skin. It is known as the “universal solvent” because it is soluble in water, ethanol, propanol, ether, benzene, chloroform, and many other organic substances. It’s a common organic solvent with the best dissolving properties. Many organic compounds, such as sugars, polymers, and peptides, as well as many inorganic salts and gases, can be dissolved by it. The molecule has idealized Cs symmetry in terms of chemical structure.

With a nonbonded electron pair on the nearly tetrahedral sulfur atom, DMSO has a trigonal pyramidal molecular geometry similar to other three-coordinate S(IV) compounds. It can dissolve a certain amount of solute whose weight is equivalent to 50-60% of its own (other typical solvents can only dissolve 10-20%), making it crucial in sample management and high-speed drug screening. Contact between dimethyl sulfoxide and chloride under some conditions can also result in an explosive reaction. It has pharmacological properties such as analgesia and anti-inflammation.

DMSO is used as a medium for topical application of pharmaceuticals due to its ability to penetrate biological membranes. It’s also been used to treat extravasation damage caused by anthracycline-based chemotherapy and to protect cells and tissue during cryopreservation. Dimethyl sulfoxide may be combined with water and stored in a molecular sieve for long-term storage and drying. Further apply it to vacuum distillation and collect the fraction of 76 °C/1600Pa (12mmHg).

Maintain temperatures below 90 °C during distillation; otherwise, a disproportionation reaction will occur, resulting in dimethyl sulfone and dimethyl sulfide. DMSO can also be dried and distilled under reduced pressure using calcium oxide, calcium hydroxide, barium oxide, and barium sulfates. It can also be partly crystallized to purify it. When dimethyl sulfoxide is mixed with some substances like sodium hydride, periodic acid, or magnesium perchlorate, it may cause an explosion, so be careful. Because of its strongly polar composition, DMSO is an effective solvent for ionic compounds, salts, and non-ionic compounds. There are some limitations to its use when used with non-polar compounds.

Alexander Zaytsev, a Russian scientist, first synthesized dimethyl sulfoxide (DMSO) in 1866 and published his findings in 1867. Industrially, dimethyl sulfoxide is made by oxidizing dimethyl sulfide, a by-product of the Kraft process, with oxygen or nitrogen dioxide. It’s a colorless, hygroscopic liquid that’s almost odorless and has a bitter taste. Water, ethanol, acetone, ether, benzene, and chloroform can all be used to dissolve it. The flash point of a closed cup is 192°F. Vapors have a higher density than air. When garlic comes into contact with the skin, it can cause stinging and burning, as well as a garlic odor on the breath.

A good solvent for transporting poisonous substances through the skin. Headaches, dizziness, and sedation are also possible side effects of high vapor concentrations. Soft electrophiles are nucleophilic to the sulfur center in DMSO, whereas hard electrophiles are nucleophilic to the oxygen. With methyl iodide it forms trimethylsulfoxonium iodide, ((CH3)3SO)I:

The Pfitzner-Moffatt oxidation and the Swern oxidation are examples of how DMSO is used as a mild oxidant in organic synthesis. DMSO is a polar aprotic solvent, radical scavenger, non-narcotic analgesic, antidote, MRI contrast agent, Escherichia coli metabolite, and alkylating agent. It’s a sulfoxide and an organic compound that’s volatile. In coordination chemistry, DMSO is a common ligand due to its ability to dissolve a wide range of salts. The complex dichlorotetrakis (dimethyl sulfoxide) ruthenium(II) (RuCl2(dmso)4) is an example.

Through the evolution of heat, dimethyl sulfoxide is highly hygroscopic, consuming up to 70% of its own weight in water. DMSO reacts with a number of Lewis acids in carbon tetrachloride solutions, including I2, phenols, trimethyltin chloride, metalloporphyrins, and the dimer Rh2Cl2(CO)4. According to a review of the basic and clinical literature on the biological activities of DMSO in cardiac and central nervous system (CNS) damage or dysfunction, this agent has been confirmed to neutralize or attenuate pathological complications that harmed or may further harm these two organ systems, either alone or in combination with other synergistic molecules.

Because of its effects, DMSO can be useful in the treatment of medical conditions such as head and spinal cord injury, stroke, memory loss, and ischemic heart disease. DMSO is commonly used as a solvent and reagent, especially as a processing reagent and spinning solvent in the acrylonitrile polymerization reaction used in polyurethane synthesis. It can also be used as a synthetic solvent for polyamide, polyimide, and polysulfone resin, as well as extraction solvents for aromatic hydrocarbon and butadiene extraction solvents and chlorofluoroaniline synthesizers.

At normal atmospheric pressure, DMSO evaporates slowly due to its high boiling point of 189 °C (372 °F). Furthermore, in the pharmaceutical industry, dimethyl sulfoxide can be used directly as a raw material or carrier of certain drugs. Dimethyl sulfoxide has a variety of effects, including anti-inflammatory, analgesic, diuretic, and sedative, and is thus known as “panacea,” which is commonly applied to analgesic medications as an active ingredient. It also has unique properties that allow it to easily penetrate the skin, giving employees an oyster-like taste.

In alkaline, acidic, and neutral conditions, DMSO is stable up to 100 °C; in the same conditions, it is stable up to temperatures near its boiling point. DMSO is thermally stable, with less than 0.1 percent purity loss when heated to 150 °C for 24 hours. However, because of its higher boiling point, it causes extremely high operating temperatures and, as a result, coking of products, affecting dimethyl sulfoxide recycling and equipment cleaning, as well as the energy consumption. As a result of its large use as an extraction agent, dimethyl sulfoxide recycling has become a bottleneck.

In TFT-LCD ‘flat panel’ displays and advanced packaging applications (such as wafer-level packaging/solder bump patterning), DMSO is commonly used to strip photoresist. DMSO is also a good paint stripper, and it’s better than nitromethane and dichloromethane. It can also be used as a recycled acetylene and sulfur dioxide absorbent, as well as synthetic fiber inhibitors, antifreeze agent, capacitor dielectric, brake oil, and rare metal extractant.